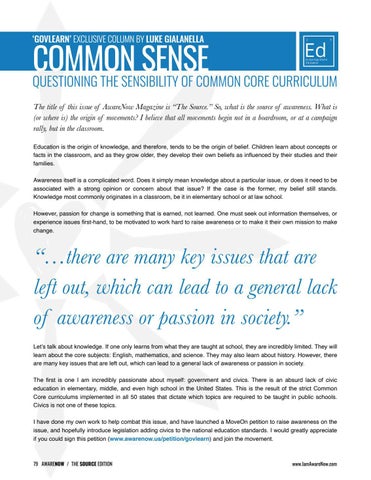 QUESTIONING THE SENSIBILITY OF COMMON CORE CURRICULUM The title of this issue of AwareNow Magazine is “The Source.” So, what is the source of awareness. What is (or where is) the origin of movements? I believe that all movements begin not in a boardroom, or at a campaign rally, but in the classroom.

Education is the origin of knowledge, and therefore, tends to be the origin of belief. Children learn about concepts or facts in the classroom, and as they grow older, they develop their own beliefs as influenced by their studies and their families.

Awareness itself is a complicated word. Does it simply mean knowledge about a particular issue, or does it need to be associated with a strong opinion or concern about that issue? If the case is the former, my belief still stands. Knowledge most commonly originates in a classroom, be it in elementary school or at law school.

However, passion for change is something that is earned, not learned. One must seek out information themselves, or experience issues first-hand, to be motivated to work hard to raise awareness or to make it their own mission to make change.

“…there are many key issues that are left out, which can lead to a general lack of awareness or passion in society.”

Let’s talk about knowledge. If one only learns from what they are taught at school, they are incredibly limited. They will learn about the core subjects: English, mathematics, and science. They may also learn about history. However, there are many key issues that are left out, which can lead to a general lack of awareness or passion in society.

The first is one I am incredibly passionate about myself: government and civics. There is an absurd lack of civic education in elementary, middle, and even high school in the United States. This is the result of the strict Common Core curriculums implemented in all 50 states that dictate which topics are required to be taught in public schools. Civics is not one of these topics.

I have done my own work to help combat this issue, and have launched a MoveOn petition to raise awareness on the issue, and hopefully introduce legislation adding civics to the national education standards. I would greatly appreciate if you could sign this petition (www.awarenow.us/petition/govlearn) and join the movement.