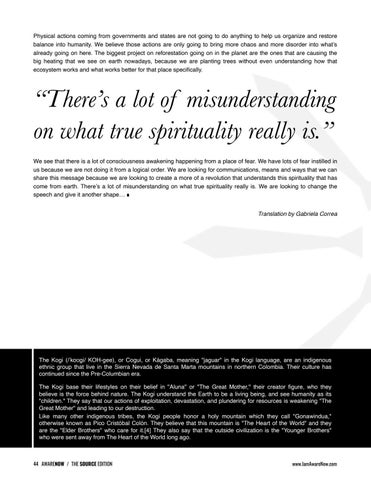 Physical actions coming from governments and states are not going to do anything to help us organize and restore balance into humanity. We believe those actions are only going to bring more chaos and more disorder into what’s already going on here. The biggest project on reforestation going on in the planet are the ones that are causing the big heating that we see on earth nowadays, because we are planting trees without even understanding how that ecosystem works and what works better for that place specifically.

The Kogi (/ˈkoʊɡi/ KOH-gee), or Cogui, or Kágaba, meaning &quot;jaguar&quot; in the Kogi language, are an indigenous ethnic group that live in the Sierra Nevada de Santa Marta mountains in northern Colombia. Their culture has continued since the Pre-Columbian era.

The Kogi base their lifestyles on their belief in &quot;Aluna&quot; or &quot;The Great Mother,&quot; their creator figure, who they believe is the force behind nature. The Kogi understand the Earth to be a living being, and see humanity as its &quot;children.&quot; They say that our actions of exploitation, devastation, and plundering for resources is weakening &quot;The Great Mother&quot; and leading to our destruction.

Like many other indigenous tribes, the Kogi people honor a holy mountain which they call &quot;Gonawindua,&quot; otherwise known as Pico Cristóbal Colón. They believe that this mountain is &quot;The Heart of the World&quot; and they are the &quot;Elder Brothers&quot; who care for it.[4] They also say that the outside civilization is the &quot;Younger Brothers&quot; who were sent away from The Heart of the World long ago.