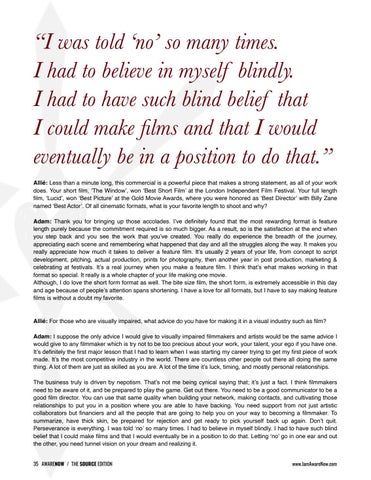 I had to believe in myself blindly.

I had to have such blind belief that

I could make films and that I would eventually be in a position to do that.”

Allié: Less than a minute long, this commercial is a powerful piece that makes a strong statement, as all of your work does. Your short film, ‘The Window’, won ‘Best Short Film’ at the London Independent Film Festival. Your full length film, ‘Lucid’, won ‘Best Picture’ at the Gold Movie Awards, where you were honored as ‘Best Director’ with Billy Zane named ‘Best Actor’. Of all cinematic formats, what is your favorite length to shoot and why?

Adam: Thank you for bringing up those accolades. I’ve definitely found that the most rewarding format is feature length purely because the commitment required is so much bigger. As a result, so is the satisfaction at the end when you step back and you see the work that you’ve created. You really do experience the breadth of the journey, appreciating each scene and remembering what happened that day and all the struggles along the way. It makes you really appreciate how much it takes to deliver a feature film. It’s usually 2 years of your life, from concept to script development, pitching, actual production, prints for photography, then another year in post production, marketing &amp; celebrating at festivals. It’s a real journey when you make a feature film. I think that’s what makes working in that format so special. It really is a whole chapter of your life making one movie.

Although, I do love the short form format as well. The bite size film, the short form, is extremely accessible in this day and age because of people’s attention spans shortening. I have a love for all formats, but I have to say making feature films is without a doubt my favorite.

Allié: For those who are visually impaired, what advice do you have for making it in a visual industry such as film?

Adam: I suppose the only advice I would give to visually impaired filmmakers and artists would be the same advice I would give to any filmmaker which is try not to be too precious about your work, your talent, your ego if you have one. It’s definitely the first major lesson that I had to learn when I was starting my career trying to get my first piece of work made. It’s the most competitive industry in the world. There are countless other people out there all doing the same thing. A lot of them are just as skilled as you are. A lot of the time it’s luck, timing, and mostly personal relationships.

The business truly is driven by nepotism. That’s not me being cynical saying that; it’s just a fact. I think filmmakers need to be aware of it, and be prepared to play the game. Get out there. You need to be a good communicator to be a good film director. You can use that same quality when building your network, making contacts, and cultivating those relationships to put you in a position where you are able to have backing. You need support from not just artistic collaborators but financiers and all the people that are going to help you on your way to becoming a filmmaker. To summarize, have thick skin, be prepared for rejection and get ready to pick yourself back up again. Don’t quit. Perseverance is everything. I was told ‘no’ so many times. I had to believe in myself blindly. I had to have such blind belief that I could make films and that I would eventually be in a position to do that. Letting ‘no’ go in one ear and out the other, you need tunnel vision on your dream and realizing it. 35 AWARENOW / THE SOURCE EDITION