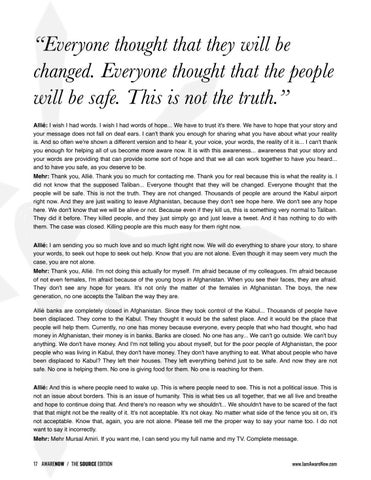 Allié: I wish I had words. I wish I had words of hope... We have to trust it&#39;s there. We have to hope that your story and your message does not fall on deaf ears. I can&#39;t thank you enough for sharing what you have about what your reality is. And so often we&#39;re shown a different version and to hear it, your voice, your words, the reality of it is... I can&#39;t thank you enough for helping all of us become more aware now. It is with this awareness... awareness that your story and your words are providing that can provide some sort of hope and that we all can work together to have you heard... and to have you safe, as you deserve to be.

Mehr: Thank you, Allié. Thank you so much for contacting me. Thank you for real because this is what the reality is. I did not know that the supposed Taliban... Everyone thought that they will be changed. Everyone thought that the people will be safe. This is not the truth. They are not changed. Thousands of people are around the Kabul airport right now. And they are just waiting to leave Afghanistan, because they don&#39;t see hope here. We don&#39;t see any hope here. We don&#39;t know that we will be alive or not. Because even if they kill us, this is something very normal to Taliban. They did it before. They killed people, and they just simply go and just leave a tweet. And it has nothing to do with them. The case was closed. Killing people are this much easy for them right now.

Allié banks are completely closed in Afghanistan. Since they took control of the Kabul... Thousands of people have been displaced. They come to the Kabul. They thought it would be the safest place. And it would be the place that people will help them. Currently, no one has money because everyone, every people that who had thought, who had money in Afghanistan, their money is in banks. Banks are closed. No one has any... We can&#39;t go outside. We can&#39;t buy anything. We don&#39;t have money. And I&#39;m not telling you about myself, but for the poor people of Afghanistan, the poor people who was living in Kabul, they don&#39;t have money. They don&#39;t have anything to eat. What about people who have been displaced to Kabul? They left their houses. They left everything behind just to be safe. And now they are not safe. No one is helping them. No one is giving food for them. No one is reaching for them.

Allié: And this is where people need to wake up. This is where people need to see. This is not a political issue. This is not an issue about borders. This is an issue of humanity. This is what ties us all together, that we all live and breathe and hope to continue doing that. And there&#39;s no reason why we shouldn&#39;t... We shouldn&#39;t have to be scared of the fact that that might not be the reality of it. It&#39;s not acceptable. It&#39;s not okay. No matter what side of the fence you sit on, it&#39;s not acceptable. Know that, again, you are not alone. Please tell me the proper way to say your name too. I do not want to say it incorrectly.

Mehr: Mehr Mursal Amiri. If you want me, I can send you my full name and my TV. Complete message.