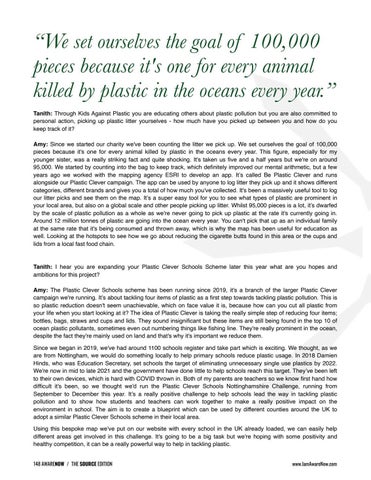 “We set ourselves the goal of 100,000 pieces because it&#39;s one for every animal killed by plastic in the oceans every year.”

Tanith: Through Kids Against Plastic you are educating others about plastic pollution but you are also committed to personal action, picking up plastic litter yourselves - how much have you picked up between you and how do you keep track of it?

Amy: Since we started our charity we&#39;ve been counting the litter we pick up. We set ourselves the goal of 100,000 pieces because it&#39;s one for every animal killed by plastic in the oceans every year. This figure, especially for my younger sister, was a really striking fact and quite shocking. It&#39;s taken us five and a half years but we&#39;re on around 95,000. We started by counting into the bag to keep track, which definitely improved our mental arithmetic, but a few years ago we worked with the mapping agency ESRI to develop an app. It’s called Be Plastic Clever and runs alongside our Plastic Clever campaign. The app can be used by anyone to log litter they pick up and it shows different categories, different brands and gives you a total of how much you&#39;ve collected. It&#39;s been a massively useful tool to log our litter picks and see them on the map. It’s a super easy tool for you to see what types of plastic are prominent in your local area, but also on a global scale and other people picking up litter. Whilst 95,000 pieces is a lot, it’s dwarfed by the scale of plastic pollution as a whole as we&#39;re never going to pick up plastic at the rate it&#39;s currently going in. Around 12 million tonnes of plastic are going into the ocean every year. You can&#39;t pick that up as an individual family at the same rate that it&#39;s being consumed and thrown away, which is why the map has been useful for education as well. Looking at the hotspots to see how we go about reducing the cigarette butts found in this area or the cups and lids from a local fast food chain.

Tanith: I hear you are expanding your Plastic Clever Schools Scheme later this year what are you hopes and ambitions for this project?

Amy: The Plastic Clever Schools scheme has been running since 2019, it&#39;s a branch of the larger Plastic Clever campaign we&#39;re running. It’s about tackling four items of plastic as a first step towards tackling plastic pollution. This is so plastic reduction doesn&#39;t seem unachievable, which on face value it is, because how can you cut all plastic from your life when you start looking at it? The idea of Plastic Clever is taking the really simple step of reducing four items; bottles, bags, straws and cups and lids. They sound insignificant but these items are still being found in the top 10 of ocean plastic pollutants, sometimes even out numbering things like fishing line. They&#39;re really prominent in the ocean, despite the fact they&#39;re mainly used on land and that&#39;s why it&#39;s important we reduce them.

Since we began in 2019, we&#39;ve had around 1100 schools register and take part which is exciting. We thought, as we are from Nottingham, we would do something locally to help primary schools reduce plastic usage. In 2018 Damien Hinds, who was Education Secretary, set schools the target of eliminating unnecessary single use plastics by 2022. We&#39;re now in mid to late 2021 and the government have done little to help schools reach this target. They’ve been left to their own devices, which is hard with COVID thrown in. Both of my parents are teachers so we know first hand how difficult it&#39;s been, so we thought we&#39;d run the Plastic Clever Schools Nottinghamshire Challenge, running from September to December this year. It’s a really positive challenge to help schools lead the way in tackling plastic pollution and to show how students and teachers can work together to make a really positive impact on the environment in school. The aim is to create a blueprint which can be used by different counties around the UK to adopt a similar Plastic Clever Schools scheme in their local area.

Using this bespoke map we&#39;ve put on our website with every school in the UK already loaded, we can easily help different areas get involved in this challenge. It&#39;s going to be a big task but we&#39;re hoping with some positivity and healthy competition, it can be a really powerful way to help in tackling plastic. 148 AWARENOW / THE SOURCE EDITION