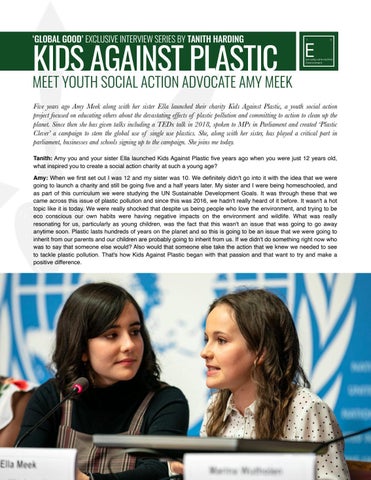 MEET YOUTH SOCIAL ACTION ADVOCATE AMY MEEK Five years ago Amy Meek along with her sister Ella launched their charity Kids Against Plastic, a youth social action project focused on educating others about the devastating effects of plastic pollution and committing to action to clean up the planet. Since then she has given talks including a TEDx talk in 2018, spoken to MPs in Parliament and created ‘Plastic Clever’ a campaign to stem the global use of single use plastics. She, along with her sister, has played a critical part in parliament, businesses and schools signing up to the campaign. She joins me today.

Tanith: Amy you and your sister Ella launched Kids Against Plastic five years ago when you were just 12 years old, what inspired you to create a social action charity at such a young age?

Amy: When we first set out I was 12 and my sister was 10. We definitely didn&#39;t go into it with the idea that we were going to launch a charity and still be going five and a half years later. My sister and I were being homeschooled, and as part of this curriculum we were studying the UN Sustainable Development Goals. It was through these that we came across this issue of plastic pollution and since this was 2016, we hadn&#39;t really heard of it before. It wasn&#39;t a hot topic like it is today. We were really shocked that despite us being people who love the environment, and trying to be eco conscious our own habits were having negative impacts on the environment and wildlife. What was really resonating for us, particularly as young children, was the fact that this wasn&#39;t an issue that was going to go away anytime soon. Plastic lasts hundreds of years on the planet and so this is going to be an issue that we were going to inherit from our parents and our children are probably going to inherit from us. If we didn&#39;t do something right now who was to say that someone else would? Also would that someone else take the action that we knew we needed to see to tackle plastic pollution. That&#39;s how Kids Against Plastic began with that passion and that want to try and make a positive difference.