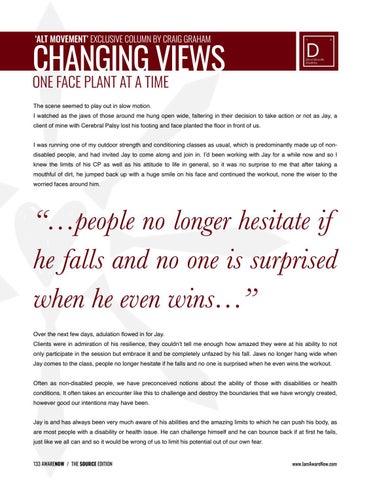 ONE FACE PLANT AT A TIME The scene seemed to play out in slow motion.

I watched as the jaws of those around me hung open wide, faltering in their decision to take action or not as Jay, a client of mine with Cerebral Palsy lost his footing and face planted the floor in front of us.

I was running one of my outdoor strength and conditioning classes as usual, which is predominantly made up of nondisabled people, and had invited Jay to come along and join in. I’d been working with Jay for a while now and so I knew the limits of his CP as well as his attitude to life in general, so it was no surprise to me that after taking a mouthful of dirt, he jumped back up with a huge smile on his face and continued the workout, none the wiser to the worried faces around him.

Over the next few days, adulation flowed in for Jay.

Clients were in admiration of his resilience, they couldn’t tell me enough how amazed they were at his ability to not only participate in the session but embrace it and be completely unfazed by his fall. Jaws no longer hang wide when Jay comes to the class, people no longer hesitate if he falls and no one is surprised when he even wins the workout.

Often as non-disabled people, we have preconceived notions about the ability of those with disabilities or health conditions. It often takes an encounter like this to challenge and destroy the boundaries that we have wrongly created, however good our intentions may have been.

Jay is and has always been very much aware of his abilities and the amazing limits to which he can push his body, as are most people with a disability or health issue. He can challenge himself and he can bounce back if at first he fails, just like we all can and so it would be wrong of us to limit his potential out of our own fear.