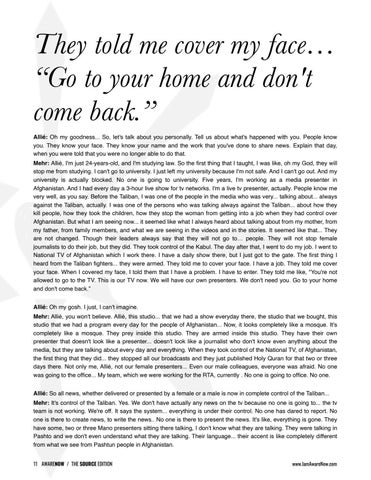 Allié: Oh my goodness... So, let&#39;s talk about you personally. Tell us about what&#39;s happened with you. People know you. They know your face. They know your name and the work that you&#39;ve done to share news. Explain that day, when you were told that you were no longer able to do that.

Mehr: Allié, I&#39;m just 24-years-old, and I&#39;m studying law. So the first thing that I taught, I was like, oh my God, they will stop me from studying. I can&#39;t go to university. I just left my university because I&#39;m not safe. And I can&#39;t go out. And my university is actually blocked. No one is going to university. Five years, I&#39;m working as a media presenter in Afghanistan. And I had every day a 3-hour live show for tv networks. I&#39;m a live tv presenter, actually. People know me very well, as you say. Before the Taliban, I was one of the people in the media who was very... talking about... always against the Taliban, actually. I was one of the persons who was talking always against the Taliban... about how they kill people, how they took the children, how they stop the woman from getting into a job when they had control over Afghanistan. But what I am seeing now... it seemed like what I always heard about talking about from my mother, from my father, from family members, and what we are seeing in the videos and in the stories. It seemed like that... They are not changed. Though their leaders always say that they will not go to… people. They will not stop female journalists to do their job, but they did. They took control of the Kabul. The day after that, I went to do my job. I went to National TV of Afghanistan which I work there. I have a daily show there, but I just got to the gate. The first thing I heard from the Taliban fighters... they were armed. They told me to cover your face. I have a job. They told me cover your face. When I covered my face, I told them that I have a problem. I have to enter. They told me like, &quot;You&#39;re not allowed to go to the TV. This is our TV now. We will have our own presenters. We don&#39;t need you. Go to your home and don&#39;t come back.”

Mehr: Allié, you won&#39;t believe. Allié, this studio... that we had a show everyday there, the studio that we bought, this studio that we had a program every day for the people of Afghanistan... Now, it looks completely like a mosque. It&#39;s completely like a mosque. They prey inside this studio. They are armed inside this studio. They have their own presenter that doesn&#39;t look like a presenter... doesn&#39;t look like a journalist who don&#39;t know even anything about the media, but they are talking about every day and everything. When they took control of the National TV, of Afghanistan, the first thing that they did... they stopped all our broadcasts and they just published Holy Quran for that two or three days there. Not only me, Allié, not our female presenters... Even our male colleagues, everyone was afraid. No one was going to the office... My team, which we were working for the RTA, currently . No one is going to office. No one.

Allié: So all news, whether delivered or presented by a female or a male is now in complete control of the Taliban...

Mehr: It&#39;s control of the Taliban. Yes. We don&#39;t have actually any news on the tv because no one is going to... the tv team is not working. We&#39;re off. It says the system... everything is under their control. No one has dared to report. No one is there to create news, to write the news.. No one is there to present the news. It&#39;s like, everything is gone. They have some, two or three Mano presenters sitting there talking, I don&#39;t know what they are talking. They were talking in Pashto and we don&#39;t even understand what they are talking. Their language... their accent is like completely different from what we see from Pashtun people in Afghanistan. 11 AWARENOW / THE SOURCE EDITION