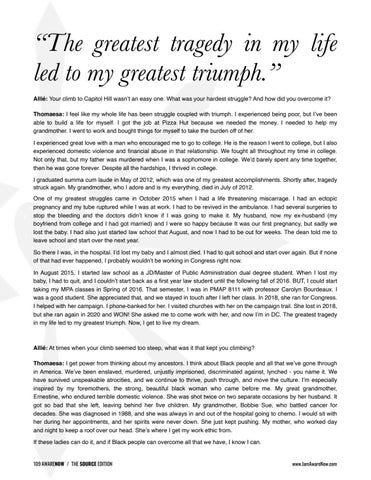 Allié: Your climb to Capitol Hill wasn’t an easy one. What was your hardest struggle? And how did you overcome it?

Thomaesa: I feel like my whole life has been struggle coupled with triumph. I experienced being poor, but I’ve been able to build a life for myself. I got the job at Pizza Hut because we needed the money. I needed to help my grandmother. I went to work and bought things for myself to take the burden off of her.

I experienced great love with a man who encouraged me to go to college. He is the reason I went to college, but I also experienced domestic violence and financial abuse in that relationship. We fought all throughout my time in college. Not only that, but my father was murdered when I was a sophomore in college. We’d barely spent any time together, then he was gone forever. Despite all the hardships, I thrived in college.

One of my greatest struggles came in October 2015 when I had a life threatening miscarrage. I had an ectopic pregnancy and my tube ruptured while I was at work. I had to be revived in the ambulance. I had several surgeries to stop the bleeding and the doctors didn’t know if I was going to make it. My husband, now my ex-husband (my boyfriend from college and I had got married) and I were so happy because It was our first pregnancy, but sadly we lost the baby. I had also just started law school that August, and now I had to be out for weeks. The dean told me to leave school and start over the next year.

So there I was, in the hospital. I’d lost my baby and I almost died. I had to quit school and start over again. But if none of that had ever happened, I probably wouldn’t be working in Congress right now.

In August 2015, I started law school as a JD/Master of Public Administration dual degree student. When I lost my baby, I had to quit, and I couldn’t start back as a first year law student until the following fall of 2016. BUT, I could start taking my MPA classes in Spring of 2016. That semester, I was in PMAP 8111 with professor Carolyn Bourdeaux. I was a good student. She appreciated that, and we stayed in touch after I left her class. In 2018, she ran for Congress. I helped with her campaign. I phone-banked for her. I visited churches with her on the campaign trail. She lost in 2018, but she ran again in 2020 and WON! She asked me to come work with her, and now I’m in DC. The greatest tragedy in my life led to my greatest triumph. Now, I get to live my dream.

Allié: At times when your climb seemed too steep, what was it that kept you climbing?

Thomaesa: I get power from thinking about my ancestors. I think about Black people and all that we’ve gone through in America. We’ve been enslaved, murdered, unjustly imprisoned, discriminated against, lynched - you name it. We have survived unspeakable atrocities, and we continue to thrive, push through, and move the culture. I’m especially inspired by my foremothers, the strong, beautiful black woman who came before me. My great grandmother, Ernestine, who endured terrible domestic violence. She was shot twice on two separate occasions by her husband. It got so bad that she left, leaving behind her five children. My grandmother, Bobbie Sue, who battled cancer for decades. She was diagnosed in 1988, and she was always in and out of the hospital going to chemo. I would sit with her during her appointments, and her spirits were never down. She just kept pushing. My mother, who worked day and night to keep a roof over our head. She’s where I get my work ethic from.

If these ladies can do it, and if Black people can overcome all that we have, I know I can. 109 AWARENOW / THE SOURCE EDITION