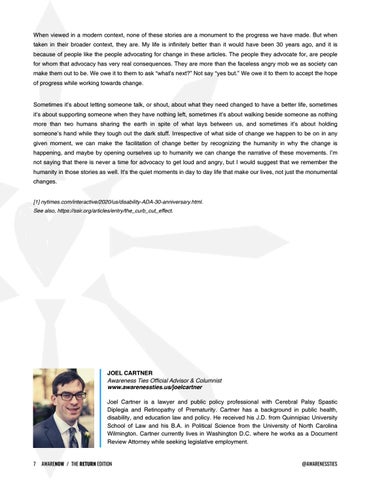 When viewed in a modern context, none of these stories are a monument to the progress we have made. But when taken in their broader context, they are. My life is infinitely better than it would have been 30 years ago, and it is because of people like the people advocating for change in these articles. The people they advocate for, are people for whom that advocacy has very real consequences. They are more than the faceless angry mob we as society can make them out to be. We owe it to them to ask “what’s next?” Not say “yes but.” We owe it to them to accept the hope of progress while working towards change.

Sometimes it’s about letting someone talk, or shout, about what they need changed to have a better life, sometimes it’s about supporting someone when they have nothing left, sometimes it’s about walking beside someone as nothing more than two humans sharing the earth in spite of what lays between us, and sometimes it’s about holding someone’s hand while they tough out the dark stuff. Irrespective of what side of change we happen to be on in any given moment, we can make the facilitation of change better by recognizing the humanity in why the change is happening, and maybe by opening ourselves up to humanity we can change the narrative of these movements. I’m not saying that there is never a time for advocacy to get loud and angry, but I would suggest that we remember the humanity in those stories as well. It’s the quiet moments in day to day life that make our lives, not just the monumental changes.

JOEL CARTNER Awareness Ties Official Advisor &amp; Columnist  www.awarenessties.us/joelcartner Joel Cartner is a lawyer and public policy professional with Cerebral Palsy Spastic Diplegia and Retinopathy of Prematurity. Cartner has a background in public health, disability, and education law and policy. He received his J.D. from Quinnipiac University School of Law and his B.A. in Political Science from the University of North Carolina Wilmington. Cartner currently lives in Washington D.C. where he works as a Document Review Attorney while seeking legislative employment.