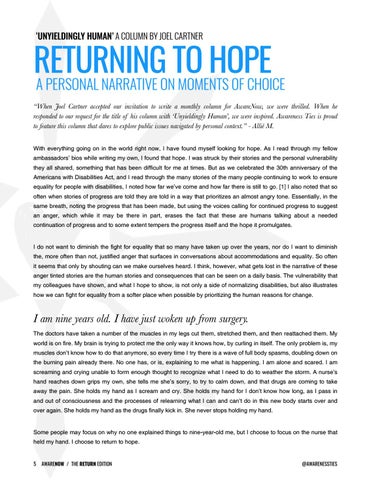 A PERSONAL NARRATIVE ON MOMENTS OF CHOICE

“When Joel Cartner accepted our invitation to write a monthly column for AwareNow, we were thrilled. When he responded to our request for the title of his column with ‘Unyieldingly Human’, we were inspired. Awareness Ties is proud to feature this column that dares to explore public issues navigated by personal context.” - Allié M. With everything going on in the world right now, I have found myself looking for hope. As I read through my fellow ambassadors’ bios while writing my own, I found that hope. I was struck by their stories and the personal vulnerability they all shared, something that has been difficult for me at times. But as we celebrated the 30th anniversary of the Americans with Disabilities Act, and I read through the many stories of the many people continuing to work to ensure equality for people with disabilities, I noted how far we’ve come and how far there is still to go. [1] I also noted that so often when stories of progress are told they are told in a way that prioritizes an almost angry tone. Essentially, in the same breath, noting the progress that has been made, but using the voices calling for continued progress to suggest an anger, which while it may be there in part, erases the fact that these are humans talking about a needed continuation of progress and to some extent tempers the progress itself and the hope it promulgates.

I do not want to diminish the fight for equality that so many have taken up over the years, nor do I want to diminish the, more often than not, justified anger that surfaces in conversations about accommodations and equality. So often it seems that only by shouting can we make ourselves heard. I think, however, what gets lost in the narrative of these anger tinted stories are the human stories and consequences that can be seen on a daily basis. The vulnerability that my colleagues have shown, and what I hope to show, is not only a side of normalizing disabilities, but also illustrates how we can fight for equality from a softer place when possible by prioritizing the human reasons for change.

I am nine years old. I have just woken up from surgery. The doctors have taken a number of the muscles in my legs cut them, stretched them, and then reattached them. My world is on fire. My brain is trying to protect me the only way it knows how, by curling in itself. The only problem is, my muscles don’t know how to do that anymore, so every time I try there is a wave of full body spasms, doubling down on the burning pain already there. No one has, or is, explaining to me what is happening. I am alone and scared. I am screaming and crying unable to form enough thought to recognize what I need to do to weather the storm. A nurse’s hand reaches down grips my own, she tells me she’s sorry, to try to calm down, and that drugs are coming to take away the pain. She holds my hand as I scream and cry. She holds my hand for I don’t know how long, as I pass in and out of consciousness and the processes of relearning what I can and can’t do in this new body starts over and over again. She holds my hand as the drugs finally kick in. She never stops holding my hand.

Some people may focus on why no one explained things to nine-year-old me, but I choose to focus on the nurse that held my hand. I choose to return to hope.