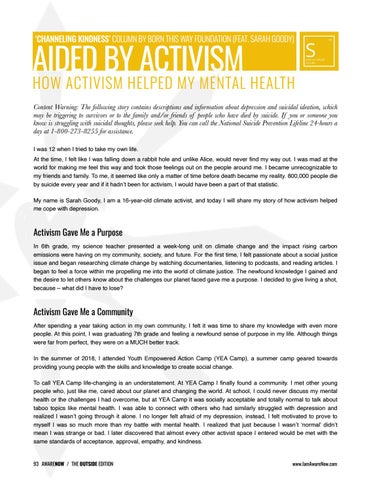 HOW ACTIVISM HELPED MY MENTAL HEALTH Content Warning: The following story contains descriptions and information about depression and suicidal ideation, which may be triggering to survivors or to the family and/or friends of people who have died by suicide. If you or someone you know is struggling with suicidal thoughts, please seek help. You can call the National Suicide Prevention Lifeline 24-hours a day at 1-800-273-8255 for assistance.

At the time, I felt like I was falling down a rabbit hole and unlike Alice, would never find my way out. I was mad at the world for making me feel this way and took those feelings out on the people around me. I became unrecognizable to my friends and family. To me, it seemed like only a matter of time before death became my reality. 800,000 people die by suicide every year and if it hadn’t been for activism, I would have been a part of that statistic.

My name is Sarah Goody, I am a 16-year-old climate activist, and today I will share my story of how activism helped me cope with depression.

Activism Gave Me a Purpose

In 6th grade, my science teacher presented a week-long unit on climate change and the impact rising carbon emissions were having on my community, society, and future. For the first time, I felt passionate about a social justice issue and began researching climate change by watching documentaries, listening to podcasts, and reading articles. I began to feel a force within me propelling me into the world of climate justice. The newfound knowledge I gained and the desire to let others know about the challenges our planet faced gave me a purpose. I decided to give living a shot, because – what did I have to lose?

Activism Gave Me a Community

After spending a year taking action in my own community, I felt it was time to share my knowledge with even more people. At this point, I was graduating 7th grade and feeling a newfound sense of purpose in my life. Although things were far from perfect, they were on a MUCH better track.

In the summer of 2018, I attended Youth Empowered Action Camp  (YEA Camp), a summer camp geared towards providing young people with the skills and knowledge to create social change.

To call YEA Camp life-changing is an understatement. At YEA Camp I finally found a community. I met other young people who, just like me, cared about our planet and changing the world. At school, I could never discuss my mental health or the challenges I had overcome, but at YEA Camp it was socially acceptable and totally normal to talk about taboo topics like mental health. I was able to connect with others who had similarly struggled with depression and realized I wasn’t going through it alone. I no longer felt afraid of my depression, instead, I felt motivated to prove to myself I was so much more than my battle with mental health. I realized that just because I wasn’t ‘normal’ didn’t mean I was strange or bad. I later discovered that almost every other activist space I entered would be met with the same standards of acceptance, approval, empathy, and kindness.

93 AWARENOW / THE OUTSIDE EDITION