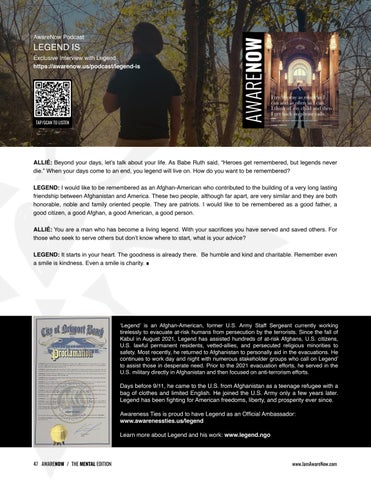 ALLIÉ: Beyond your days, let’s talk about your life. As Babe Ruth said, “Heroes get remembered, but legends never die.” When your days come to an end, you legend will live on. How do you want to be remembered?

LEGEND: I would like to be remembered as an Afghan-American who contributed to the building of a very long lasting friendship between Afghanistan and America. These two people, although far apart, are very similar and they are both honorable, noble and family oriented people. They are patriots. I would like to be remembered as a good father, a good citizen, a good Afghan, a good American, a good person.

ALLIÉ: You are a man who has become a living legend. With your sacrifices you have served and saved others. For those who seek to serve others but don’t know where to start, what is your advice?

LEGEND: It starts in your heart. The goodness is already there. Be humble and kind and charitable. Remember even a smile is kindness. Even a smile is charity. ∎

‘Legend’ is an Afghan-American, former U.S. Army Staff Sergeant currently working tirelessly to evacuate at-risk humans from persecution by the terrorists. Since the fall of Kabul in August 2021, Legend has assisted hundreds of at-risk Afghans, U.S. citizens, U.S. lawful permanent residents, vetted-allies, and persecuted religious minorities to safety. Most recently, he returned to Afghanistan to personally aid in the evacuations. He continues to work day and night with numerous stakeholder groups who call on Legend’ to assist those in desperate need. Prior to the 2021 evacuation efforts, he served in the U.S. military directly in Afghanistan and then focused on anti-terrorism efforts.

Days before 9/11, he came to the U.S. from Afghanistan as a teenage refugee with a bag of clothes and limited English. He joined the U.S. Army only a few years later. Legend has been fighting for American freedoms, liberty, and prosperity ever since.

Awareness Ties is proud to have Legend as an Official Ambassador:

Learn more about Legend and his work: www.legend.ngo