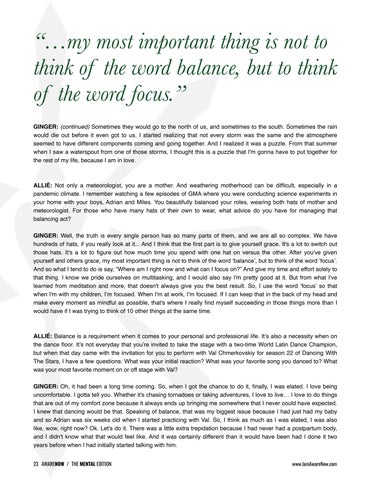 “…my most important thing is not to think of the word balance, but to think of the word focus.” GINGER: (continued) Sometimes they would go to the north of us, and sometimes to the south. Sometimes the rain would die out before it even got to us. I started realizing that not every storm was the same and the atmosphere seemed to have different components coming and going together. And I realized it was a puzzle. From that summer when I saw a waterspout from one of those storms, I thought this is a puzzle that I&#39;m gonna have to put together for the rest of my life, because I am in love.

ALLIÉ: Not only a meteorologist, you are a mother. And weathering motherhood can be difficult, especially in a pandemic climate. I remember watching a few episodes of GMA where you were conducting science experiments in your home with your boys, Adrian and Miles. You beautifully balanced your roles, wearing both hats of mother and meteorologist. For those who have many hats of their own to wear, what advice do you have for managing that balancing act?

GINGER: Well, the truth is every single person has so many parts of them, and we are all so complex. We have hundreds of hats, if you really look at it... And I think that the first part is to give yourself grace. It&#39;s a lot to switch out those hats. It&#39;s a lot to figure out how much time you spend with one hat on versus the other. After you&#39;ve given yourself and others grace, my most important thing is not to think of the word ‘balance’, but to think of the word ‘focus’. And so what I tend to do is say, “Where am I right now and what can I focus on?” And give my time and effort solely to that thing. I know we pride ourselves on multitasking, and I would also say I&#39;m pretty good at it. But from what I&#39;ve learned from meditation and more, that doesn&#39;t always give you the best result. So, I use the word ‘focus’ so that when I&#39;m with my children, I’m focused. When I&#39;m at work, I’m focused. If I can keep that in the back of my head and make every moment as mindful as possible, that&#39;s where I really find myself succeeding in those things more than I would have if I was trying to think of 10 other things at the same time.

ALLIÉ: Balance is a requirement when it comes to your personal and professional life. It’s also a necessity when on the dance floor. It’s not everyday that you’re invited to take the stage with a two-time World Latin Dance Champion, but when that day came with the invitation for you to perform with Val Chmerkovskiy for season 22 of Dancing With The Stars, I have a few questions. What was your initial reaction? What was your favorite song you danced to? What was your most favorite moment on or off stage with Val?

GINGER: Oh, it had been a long time coming. So, when I got the chance to do it, finally, I was elated. I love being uncomfortable. I gotta tell you. Whether it&#39;s chasing tornadoes or taking adventures, I love to live… I love to do things that are out of my comfort zone because it always ends up bringing me somewhere that I never could have expected. I knew that dancing would be that. Speaking of balance, that was my biggest issue because I had just had my baby and so Adrian was six weeks old when I started practicing with Val. So, I think as much as I was elated, I was also like, wow, right now? Ok. Let&#39;s do it. There was a little extra trepidation because I had never had a postpartum body, and I didn&#39;t know what that would feel like. And it was certainly different than it would have been had I done it two years before when I had initially started talking with him. 23 AWARENOW / THE MENTAL EDITION