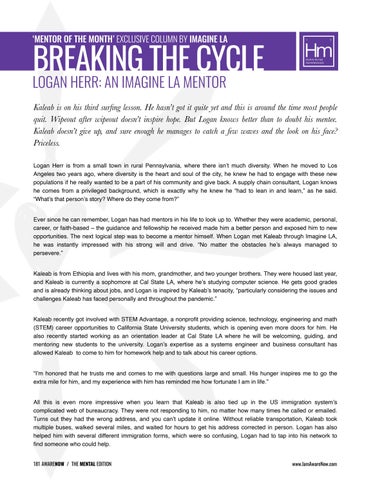 ‘MENTOR OF THE MONTH’ EXCLUSIVE COLUMN BY IMAGINE LA

Kaleab is on his third surfing lesson. He hasn’t got it quite yet and this is around the time most people quit. Wipeout after wipeout doesn’t inspire hope. But Logan knows better than to doubt his mentee. Kaleab doesn’t give up, and sure enough he manages to catch a few waves and the look on his face? Priceless. Logan Herr is from a small town in rural Pennsylvania, where there isn’t much diversity. When he moved to Los Angeles two years ago, where diversity is the heart and soul of the city, he knew he had to engage with these new populations if he really wanted to be a part of his community and give back. A supply chain consultant, Logan knows he comes from a privileged background, which is exactly why he knew he “had to lean in and learn,” as he said. “What’s that person’s story? Where do they come from?”

Ever since he can remember, Logan has had mentors in his life to look up to. Whether they were academic, personal, career, or faith-based – the guidance and fellowship he received made him a better person and exposed him to new opportunities. The next logical step was to become a mentor himself. When Logan met Kaleab through Imagine LA, he was instantly impressed with his strong will and drive. “No matter the obstacles he’s always managed to persevere.”

Kaleab is from Ethiopia and lives with his mom, grandmother, and two younger brothers. They were housed last year, and Kaleab is currently a sophomore at Cal State LA, where he’s studying computer science. He gets good grades and is already thinking about jobs, and Logan is inspired by Kaleab’s tenacity, “particularly considering the issues and challenges Kaleab has faced personally and throughout the pandemic.”

Kaleab recently got involved with STEM Advantage, a nonprofit providing science, technology, engineering and math (STEM) career opportunities to California State University students, which is opening even more doors for him. He also recently started working as an orientation leader at Cal State LA where he will be welcoming, guiding, and mentoring new students to the university. Logan’s expertise as a systems engineer and business consultant has allowed Kaleab to come to him for homework help and to talk about his career options.

“I’m honored that he trusts me and comes to me with questions large and small. His hunger inspires me to go the extra mile for him, and my experience with him has reminded me how fortunate I am in life.”

All this is even more impressive when you learn that Kaleab is also tied up in the US immigration system’s complicated web of bureaucracy. They were not responding to him, no matter how many times he called or emailed. Turns out they had the wrong address, and you can’t update it online. Without reliable transportation, Kaleab took multiple buses, walked several miles, and waited for hours to get his address corrected in person. Logan has also helped him with several different immigration forms, which were so confusing, Logan had to tap into his network to find someone who could help. 181 AWARENOW / THE MENTAL EDITION