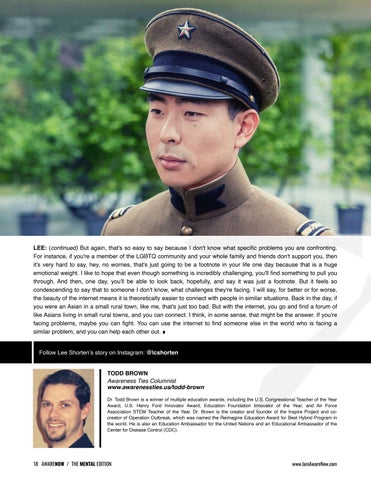 LEE: (continued) But again, that&#39;s so easy to say because I don&#39;t know what specific problems you are confronting. For instance, if you&#39;re a member of the LGBTQ community and your whole family and friends don&#39;t support you, then it&#39;s very hard to say, hey, no worries, that&#39;s just going to be a footnote in your life one day because that is a huge emotional weight. I like to hope that even though something is incredibly challenging, you&#39;ll find something to pull you through. And then, one day, you&#39;ll be able to look back, hopefully, and say it was just a footnote. But it feels so condescending to say that to someone I don&#39;t know, what challenges they&#39;re facing. I will say, for better or for worse, the beauty of the internet means it is theoretically easier to connect with people in similar situations. Back in the day, if you were an Asian in a small rural town, like me, that&#39;s just too bad. But with the internet, you go and find a forum of like Asians living in small rural towns, and you can connect. I think, in some sense, that might be the answer. If you&#39;re facing problems, maybe you can fight. You can use the internet to find someone else in the world who is facing a similar problem, and you can help each other out. ∎

Awareness Ties Columnist www.awarenessties.us/todd-brown Dr. Todd Brown is a winner of multiple education awards, including the U.S. Congressional Teacher of the Year Award, U.S. Henry Ford Innovator Award, Education Foundation Innovator of the Year, and Air Force Association STEM Teacher of the Year. Dr. Brown is the creator and founder of the Inspire Project and cocreator of Operation Outbreak, which was named the Reimagine Education Award for Best Hybrid Program in the world. He is also an Education Ambassador for the United Nations and an Educational Ambassador of the Center for Disease Control (CDC).