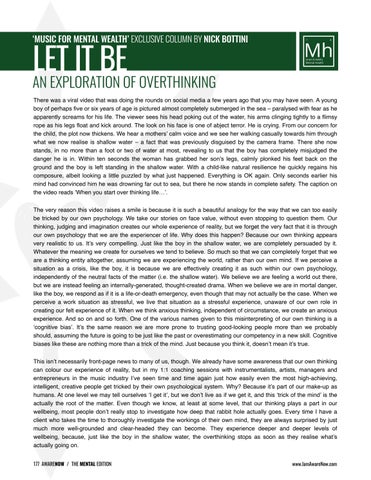 AN EXPLORATION OF OVERTHINKING There was a viral video that was doing the rounds on social media a few years ago that you may have seen. A young boy of perhaps five or six years of age is pictured almost completely submerged in the sea – paralysed with fear as he apparently screams for his life. The viewer sees his head poking out of the water, his arms clinging tightly to a flimsy rope as his legs float and kick around. The look on his face is one of abject terror. He is crying. From our concern for the child, the plot now thickens. We hear a mothers’ calm voice and we see her walking casually towards him through what we now realise is shallow water – a fact that was previously disguised by the camera frame. There she now stands, in no more than a foot or two of water at most, revealing to us that the boy has completely misjudged the danger he is in. Within ten seconds the woman has grabbed her son’s legs, calmly plonked his feet back on the ground and the boy is left standing in the shallow water. With a child-like natural resilience he quickly regains his composure, albeit looking a little puzzled by what just happened. Everything is OK again. Only seconds earlier his mind had convinced him he was drowning far out to sea, but there he now stands in complete safety. The caption on the video reads ‘When you start over thinking life…’.

The very reason this video raises a smile is because it is such a beautiful analogy for the way that we can too easily be tricked by our own psychology. We take our stories on face value, without even stopping to question them. Our thinking, judging and imagination creates our whole experience of reality, but we forget the very fact that it is through our own psychology that we are the experiencer of life. Why does this happen? Because our own thinking appears very realistic to us. It’s very compelling. Just like the boy in the shallow water, we are completely persuaded by it. Whatever the meaning we create for ourselves we tend to believe. So much so that we can completely forget that we are a thinking entity altogether, assuming we are experiencing the world, rather than our own mind. If we perceive a situation as a crisis, like the boy, it is because we are effectively creating it as such within our own psychology, independently of the neutral facts of the matter (i.e. the shallow water). We believe we are feeling a world out there, but we are instead feeling an internally-generated, thought-created drama. When we believe we are in mortal danger, like the boy, we respond as if it is a life-or-death emergency, even though that may not actually be the case. When we perceive a work situation as stressful, we live that situation as a stressful experience, unaware of our own role in creating our felt experience of it. When we think anxious thinking, independent of circumstance, we create an anxious experience. And so on and so forth. One of the various names given to this misinterpreting of our own thinking is a ‘cognitive bias’. It’s the same reason we are more prone to trusting good-looking people more than we probably should, assuming the future is going to be just like the past or overestimating our competency in a new skill. Cognitive biases like these are nothing more than a trick of the mind. Just because you think it, doesn’t mean it’s true.

This isn’t necessarily front-page news to many of us, though. We already have some awareness that our own thinking can colour our experience of reality, but in my 1:1 coaching sessions with instrumentalists, artists, managers and entrepreneurs in the music industry I’ve seen time and time again just how easily even the most high-achieving, intelligent, creative people get tricked by their own psychological system. Why? Because it’s part of our make-up as humans. At one level we may tell ourselves ‘I get it’, but we don’t live as if we get it, and this ‘trick of the mind’ is the actually the root of the matter. Even though we know, at least at some level, that our thinking plays a part in our wellbeing, most people don’t really stop to investigate how deep that rabbit hole actually goes. Every time I have a client who takes the time to thoroughly investigate the workings of their own mind, they are always surprised by just much more well-grounded and clear-headed they can become. They experience deeper and deeper levels of wellbeing, because, just like the boy in the shallow water, the overthinking stops as soon as they realise what’s actually going on. 177 AWARENOW / THE MENTAL EDITION