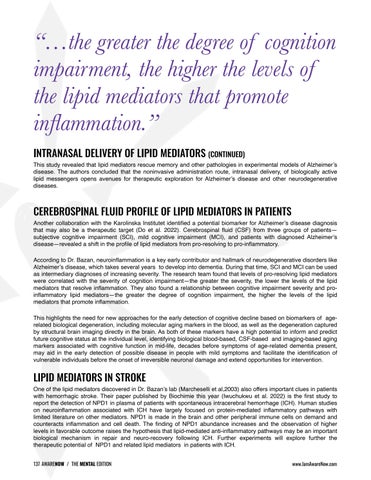 “…the greater the degree of cognition impairment, the higher the levels of the lipid mediators that promote inflammation.” INTRANASAL DELIVERY OF LIPID MEDIATORS (CONTINUED) This study revealed that lipid mediators rescue memory and other pathologies in experimental models of Alzheimer’s disease. The authors concluded that the noninvasive administration route, intranasal delivery, of biologically active lipid messengers opens avenues for therapeutic exploration for Alzheimer’s disease and other neurodegenerative diseases.

CEREBROSPINAL FLUID PROFILE OF LIPID MEDIATORS IN PATIENTS Another collaboration with the Karolinska Institutet identified a potential biomarker for Alzheimer’s disease diagnosis that may also be a therapeutic target (Do et al. 2022). Cerebrospinal fluid (CSF) from three groups of patients— subjective cognitive impairment (SCI), mild cognitive impairment (MCI), and patients with diagnosed Alzheimer’s disease—revealed a shift in the profile of lipid mediators from pro-resolving to pro-inflammatory.

According to Dr. Bazan, neuroinflammation is a key early contributor and hallmark of neurodegenerative disorders like Alzheimer’s disease, which takes several years to develop into dementia. During that time, SCI and MCI can be used as intermediary diagnoses of increasing severity. The research team found that levels of pro-resolving lipid mediators were correlated with the severity of cognition impairment—the greater the severity, the lower the levels of the lipid mediators that resolve inflammation. They also found a relationship between cognitive impairment severity and proinflammatory lipid mediators—the greater the degree of cognition impairment, the higher the levels of the lipid mediators that promote inflammation.

This highlights the need for new approaches for the early detection of cognitive decline based on biomarkers of agerelated biological degeneration, including molecular aging markers in the blood, as well as the degeneration captured by structural brain imaging directly in the brain. As both of these markers have a high potential to inform and predict future cognitive status at the individual level, identifying biological blood-based, CSF-based and imaging-based aging markers associated with cognitive function in mid-life, decades before symptoms of age-related dementia present, may aid in the early detection of possible disease in people with mild symptoms and facilitate the identification of vulnerable individuals before the onset of irreversible neuronal damage and extend opportunities for intervention.

LIPID MEDIATORS IN STROKE One of the lipid mediators discovered in Dr. Bazan’s lab (Marcheselli et al,2003) also offers important clues in patients with hemorrhagic stroke. Their paper published by Biochimie this year (Iwuchukwu et al. 2022) is the first study to report the detection of NPD1 in plasma of patients with spontaneous intracerebral hemorrhage (ICH). Human studies on neuroinflammation associated with ICH have largely focused on protein-mediated inflammatory pathways with limited literature on other mediators. NPD1 is made in the brain and other peripheral immune cells on demand and counteracts inflammation and cell death. The finding of NPD1 abundance increases and the observation of higher levels in favorable outcome raises the hypothesis that lipid-mediated anti-inflammatory pathways may be an important biological mechanism in repair and neuro-recovery following ICH. Further experiments will explore further the therapeutic potential of NPD1 and related lipid mediators in patients with ICH. 137 AWARENOW / THE MENTAL EDITION