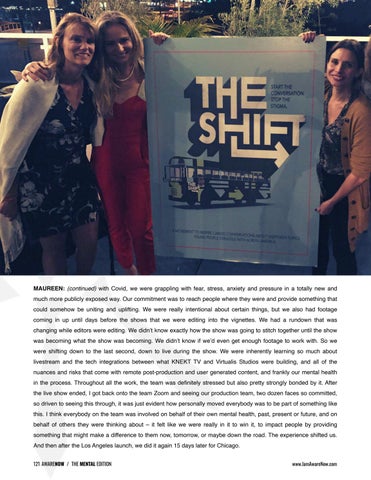 MAUREEN: (continued) with Covid, we were grappling with fear, stress, anxiety and pressure in a totally new and much more publicly exposed way. Our commitment was to reach people where they were and provide something that could somehow be uniting and uplifting. We were really intentional about certain things, but we also had footage coming in up until days before the shows that we were editing into the vignettes. We had a rundown that was changing while editors were editing. We didn’t know exactly how the show was going to stitch together until the show was becoming what the show was becoming. We didn’t know if we’d even get enough footage to work with. So we were shifting down to the last second, down to live during the show. We were inherently learning so much about livestream and the tech integrations between what KNEKT TV and Virtualis Studios were building, and all of the nuances and risks that come with remote post-production and user generated content, and frankly our mental health in the process. Throughout all the work, the team was definitely stressed but also pretty strongly bonded by it. After the live show ended, I got back onto the team Zoom and seeing our production team, two dozen faces so committed, so driven to seeing this through, it was just evident how personally moved everybody was to be part of something like this. I think everybody on the team was involved on behalf of their own mental health, past, present or future, and on behalf of others they were thinking about – it felt like we were really in it to win it, to impact people by providing something that might make a difference to them now, tomorrow, or maybe down the road. The experience shifted us. And then after the Los Angeles launch, we did it again 15 days later for Chicago. 121 AWARENOW / THE MENTAL EDITION