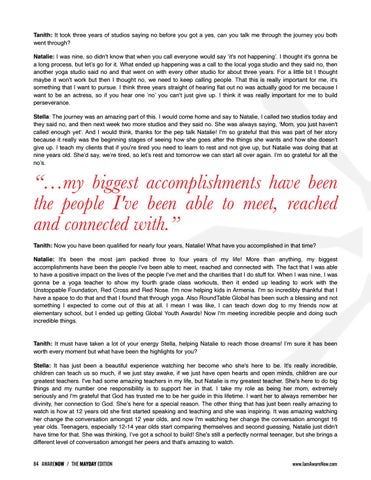 Tanith: It took three years of studios saying no before you got a yes, can you talk me through the journey you both went through?

Natalie: I was nine, so didn't know that when you call everyone would say ‘it's not happening’. I thought it's gonna be a long process, but let’s go for it. What ended up happening was a call to the local yoga studio and they said no, then another yoga studio said no and that went on with every other studio for about three years. For a little bit I thought maybe it won't work but then I thought no, we need to keep calling people. That this is really important for me, it's something that I want to pursue. I think three years straight of hearing flat out no was actually good for me because I want to be an actress, so if you hear one ‘no’ you can't just give up. I think it was really important for me to build perseverance.

Stella: The journey was an amazing part of this. I would come home and say to Natalie, I called two studios today and they said no, and then next week two more studios and they said no. She was always saying, ‘Mom, you just haven't called enough yet’. And I would think, thanks for the pep talk Natalie! I'm so grateful that this was part of her story because it really was the beginning stages of seeing how she goes after the things she wants and how she doesn't give up. I teach my clients that if you're tired you need to learn to rest and not give up, but Natalie was doing that at nine years old. She’d say, we’re tired, so let’s rest and tomorrow we can start all over again. I’m so grateful for all the no’s.

“…my biggest accomplishments have been the people I've been able to meet, reached and connected with.”

Tanith: Now you have been qualified for nearly four years, Natalie! What have you accomplished in that time?

Natalie: It's been the most jam packed three to four years of my life! More than anything, my biggest accomplishments have been the people I've been able to meet, reached and connected with. The fact that I was able to have a positive impact on the lives of the people I've met and the charities that I do stuff for. When I was nine, I was gonna be a yoga teacher to show my fourth grade class workouts, then it ended up leading to work with the Unstoppable Foundation, Red Cross and Red Nose. I'm now helping kids in Armenia. I'm so incredibly thankful that I have a space to do that and that I found that through yoga. Also RoundTable Global has been such a blessing and not something I expected to come out of this at all. I mean I was like, I can teach down dog to my friends now at elementary school, but I ended up getting Global Youth Awards! Now I'm meeting incredible people and doing such incredible things.

Tanith: It must have taken a lot of your energy Stella, helping Natalie to reach those dreams! I’m sure it has been worth every moment but what have been the highlights for you?

Stella: It has just been a beautiful experience watching her become who she's here to be. It's really incredible, children can teach us so much, if we just stay awake, if we just have open hearts and open minds, children are our greatest teachers. I've had some amazing teachers in my life, but Natalie is my greatest teacher. She's here to do big things and my number one responsibility is to support her in that. I take my role as being her mom, extremely seriously and I'm grateful that God has trusted me to be her guide in this lifetime. I want her to always remember her divinity, her connection to God. She’s here for a special reason. The other thing that has just been really amazing to watch is how at 12 years old she first started speaking and teaching and she was inspiring. It was amazing watching her change the conversation amongst 12 year olds, and now I'm watching her change the conversation amongst 16 year olds. Teenagers, especially 12-14 year olds start comparing themselves and second guessing, Natalie just didn't have time for that. She was thinking, I’ve got a school to build! She's still a perfectly normal teenager, but she brings a different level of conversation amongst her peers and that's amazing to watch. 84 AWARENOW / THE MAYDAY EDITION