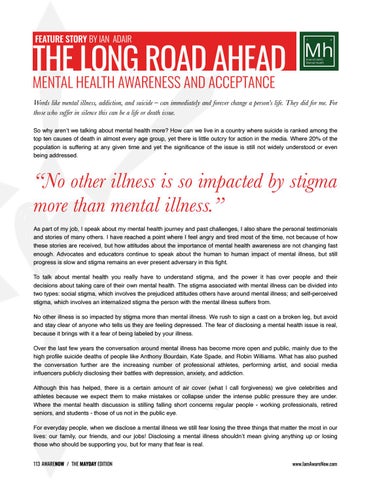 THE LONG ROAD AHEAD

Words like mental illness, addiction, and suicide – can immediately and forever change a person’s life. They did for me. For those who suffer in silence this can be a life or death issue.

So why aren’t we talking about mental health more? How can we live in a country where suicide is ranked among the top ten causes of death in almost every age group, yet there is little outcry for action in the media. Where 20% of the population is suffering at any given time and yet the significance of the issue is still not widely understood or even being addressed.

“No other illness is so impacted by stigma more than mental illness.”

As part of my job, I speak about my mental health journey and past challenges, I also share the personal testimonials and stories of many others. I have reached a point where I feel angry and tired most of the time, not because of how these stories are received, but how attitudes about the importance of mental health awareness are not changing fast enough. Advocates and educators continue to speak about the human to human impact of mental illness, but still progress is slow and stigma remains an ever present adversary in this fight.

No other illness is so impacted by stigma more than mental illness. We rush to sign a cast on a broken leg, but avoid and stay clear of anyone who tells us they are feeling depressed. The fear of disclosing a mental health issue is real, because it brings with it a fear of being labeled by your illness.

Over the last few years the conversation around mental illness has become more open and public, mainly due to the high profile suicide deaths of people like Anthony Bourdain, Kate Spade, and Robin Williams. What has also pushed the conversation further are the increasing number of professional athletes, performing artist, and social media influencers publicly disclosing their battles with depression, anxiety, and addiction.

Although this has helped, there is a certain amount of air cover (what I call forgiveness) we give celebrities and athletes because we expect them to make mistakes or collapse under the intense public pressure they are under. Where the mental health discussion is stilling falling short concerns regular people - working professionals, retired seniors, and students - those of us not in the public eye.

For everyday people, when we disclose a mental illness we still fear losing the three things that matter the most in our lives: our family, our friends, and our jobs! Disclosing a mental illness shouldn’t mean giving anything up or losing those who should be supporting you, but for many that fear is real. 113 AWARENOW / THE MAYDAY EDITION