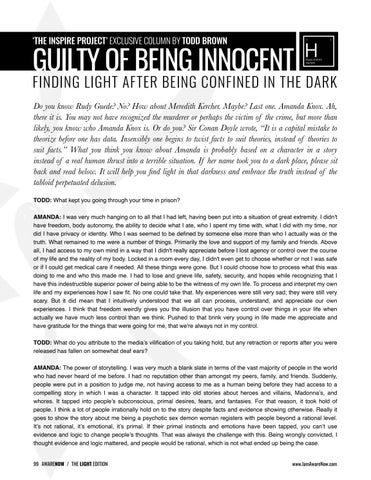 GUILTY OF BEING INNOCENT

FINDING LIGHT AFTER BEING CONFINED IN THE DARK Do you know Rudy Guede? No? How about Meredith Kercher. Maybe? Last one. Amanda Knox. Ah, there it is. You may not have recognized the murderer or perhaps the victim of the crime, but more than likely, you know who Amanda Knox is. Or do you? Sir Conan Doyle wrote, “It is a capital mistake to theorize before one has data. Insensibly one begins to twist facts to suit theories, instead of theories to suit facts.” What you think you know about Amanda is probably based on a character in a story instead of a real human thrust into a terrible situation. If her name took you to a dark place, please sit back and read below. It will help you find light in that darkness and embrace the truth instead of the tabloid perpetuated delusion. TODD: What kept you going through your time in prison?

AMANDA: I was very much hanging on to all that I had left, having been put into a situation of great extremity. I didn&#39;t have freedom, body autonomy, the ability to decide what I ate, who I spent my time with, what I did with my time, nor did I have privacy or identity. Who I was seemed to be defined by someone else more than who I actually was or the truth. What remained to me were a number of things. Primarily the love and support of my family and friends. Above all, I had access to my own mind in a way that I didn&#39;t really appreciate before I lost agency or control over the course of my life and the reality of my body. Locked in a room every day, I didn&#39;t even get to choose whether or not I was safe or if I could get medical care if needed. All these things were gone. But I could choose how to process what this was doing to me and who this made me. I had to lose and grieve life, safety, security, and hopes while recognizing that I have this indestructible superior power of being able to be the witness of my own life. To process and interpret my own life and my experiences how I saw fit. No one could take that. My experiences were still very sad; they were still very scary. But it did mean that I intuitively understood that we all can process, understand, and appreciate our own experiences. I think that freedom weirdly gives you the illusion that you have control over things in your life when actually we have much less control than we think. Pushed to that brink very young in life made me appreciate and have gratitude for the things that were going for me, that we&#39;re always not in my control.

TODD: What do you attribute to the media’s vilification of you taking hold, but any retraction or reports after you were released has fallen on somewhat deaf ears?

AMANDA: The power of storytelling. I was very much a blank slate in terms of the vast majority of people in the world who had never heard of me before. I had no reputation other than amongst my peers, family, and friends. Suddenly, people were put in a position to judge me, not having access to me as a human being before they had access to a compelling story in which I was a character. It tapped into old stories about heroes and villains, Madonna’s, and whores. It tapped into people’s subconscious, primal desires, fears, and fantasies. For that reason, it took hold of people. I think a lot of people irrationally hold on to the story despite facts and evidence showing otherwise. Really it goes to show the story about me being a psychotic sex demon woman registers with people beyond a rational level. It’s not rational, it’s emotional, it’s primal. If their primal instincts and emotions have been tapped, you can’t use evidence and logic to change people’s thoughts. That was always the challenge with this. Being wrongly convicted, I thought evidence and logic mattered, and people would be rational, which is not what ended up being the case. 99 AWARENOW / THE LIGHT EDITION