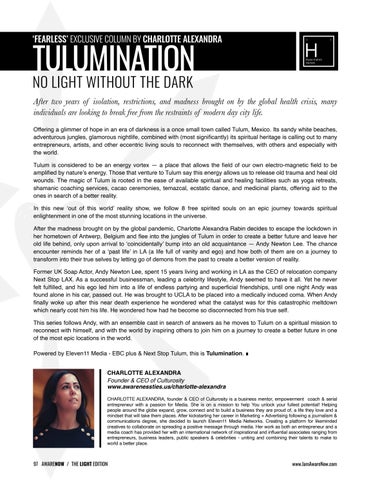 TULUMINATION NO LIGHT WITHOUT THE DARK

After two years of isolation, restrictions, and madness brought on by the global health crisis, many individuals are looking to break free from the restraints of modern day city life. Offering a glimmer of hope in an era of darkness is a once small town called Tulum, Mexico. Its sandy white beaches, adventurous jungles, glamorous nightlife, combined with (most significantly) its spiritual heritage is calling out to many entrepreneurs, artists, and other eccentric living souls to reconnect with themselves, with others and especially with the world.

Tulum is considered to be an energy vortex — a place that allows the field of our own electro-magnetic field to be amplified by nature’s energy. Those that venture to Tulum say this energy allows us to release old trauma and heal old wounds. The magic of Tulum is rooted in the ease of available spiritual and healing facilities such as yoga retreats, shamanic coaching services, cacao ceremonies, temazcal, ecstatic dance, and medicinal plants, offering aid to the ones in search of a better reality.

In this new ‘out of this world’ reality show, we follow 8 free spirited souls on an epic journey towards spiritual enlightenment in one of the most stunning locations in the universe.

After the madness brought on by the global pandemic, Charlotte Alexandra Rabin decides to escape the lockdown in her hometown of Antwerp, Belgium and flee into the jungles of Tulum in order to create a better future and leave her old life behind, only upon arrival to ‘coincidentally’ bump into an old acquaintance — Andy Newton Lee. The chance encounter reminds her of a ‘past life’ in LA (a life full of vanity and ego) and how both of them are on a journey to transform into their true selves by letting go of demons from the past to create a better version of reality.

Former UK Soap Actor, Andy Newton Lee, spent 15 years living and working in LA as the CEO of relocation company Next Stop LAX. As a successful businessman, leading a celebrity lifestyle, Andy seemed to have it all. Yet he never felt fulfilled, and his ego led him into a life of endless partying and superficial friendships, until one night Andy was found alone in his car, passed out. He was brought to UCLA to be placed into a medically induced coma. When Andy finally woke up after this near death experience he wondered what the catalyst was for this catastrophic meltdown which nearly cost him his life. He wondered how had he become so disconnected from his true self.

This series follows Andy, with an ensemble cast in search of answers as he moves to Tulum on a spiritual mission to reconnect with himself, and with the world by inspiring others to join him on a journey to create a better future in one of the most epic locations in the world.

Powered by Eleven11 Media - EBC plus &amp; Next Stop Tulum, this is Tulumination. ∎ CHARLOTTE ALEXANDRA

Founder &amp; CEO of Culturosity www.awarenessties.us/charlotte-alexandra CHARLOTTE ALEXANDRA, founder &amp; CEO of Culturosity is a business mentor, empowerment coach &amp; serial entrepreneur with a passion for Media. She is on a mission to help You unlock your fullest potential! Helping people around the globe expand, grow, connect and to build a business they are proud of, a life they love and a mindset that will take them places. After kickstarting her career in Marketing + Advertising following a journalism &amp; communications degree, she decided to launch Eleven11 Media Networks. Creating a platform for likeminded creatives to collaborate on spreading a positive message through media. Her work as both an entrepreneur and a media coach has provided her with an international network of inspirational and influential associates ranging from entrepreneurs, business leaders, public speakers &amp; celebrities - uniting and combining their talents to make to world a better place.