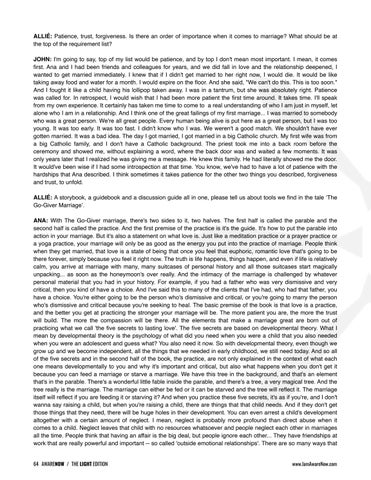 ALLIÉ: Patience, trust, forgiveness. Is there an order of importance when it comes to marriage? What should be at the top of the requirement list?

JOHN: I&#39;m going to say, top of my list would be patience, and by top I don&#39;t mean most important. I mean, it comes first. Ana and I had been friends and colleagues for years, and we did fall in love and the relationship deepened, I wanted to get married immediately. I knew that if I didn&#39;t get married to her right now, I would die. It would be like taking away food and water for a month. I would expire on the floor. And she said, &quot;We can&#39;t do this. This is too soon.&quot; And I fought it like a child having his lollipop taken away. I was in a tantrum, but she was absolutely right. Patience was called for. In retrospect, I would wish that I had been more patient the first time around. It takes time. I&#39;ll speak from my own experience. It certainly has taken me time to come to a real understanding of who I am just in myself, let alone who I am in a relationship. And I think one of the great failings of my first marriage... I was married to somebody who was a great person. We&#39;re all great people. Every human being alive is put here as a great person, but I was too young. It was too early. It was too fast. I didn&#39;t know who I was. We weren&#39;t a good match. We shouldn&#39;t have ever gotten married. It was a bad idea. The day I got married, I got married in a big Catholic church. My first wife was from a big Catholic family, and I don&#39;t have a Catholic background. The priest took me into a back room before the ceremony and showed me, without explaining a word, where the back door was and waited a few moments. It was only years later that I realized he was giving me a message. He knew this family. He had literally showed me the door. It would&#39;ve been wise if I had some introspection at that time. You know, we&#39;ve had to have a lot of patience with the hardships that Ana described. I think sometimes it takes patience for the other two things you described, forgiveness and trust, to unfold.

ALLIÉ: A storybook, a guidebook and a discussion guide all in one, please tell us about tools we find in the tale ‘The Go-Giver Marriage’.

ANA: With The Go-Giver marriage, there&#39;s two sides to it, two halves. The first half is called the parable and the second half is called the practice. And the first premise of the practice is it&#39;s the guide. It&#39;s how to put the parable into action in your marriage. But it&#39;s also a statement on what love is. Just like a meditation practice or a prayer practice or a yoga practice, your marriage will only be as good as the energy you put into the practice of marriage. People think when they get married, that love is a state of being that once you feel that euphoric, romantic love that&#39;s going to be there forever, simply because you feel it right now. The truth is life happens, things happen, and even if life is relatively calm, you arrive at marriage with many, many suitcases of personal history and all those suitcases start magically unpacking... as soon as the honeymoon&#39;s over really. And the intimacy of the marriage is challenged by whatever personal material that you had in your history. For example, if you had a father who was very dismissive and very critical, then you kind of have a choice. And I&#39;ve said this to many of the clients that I&#39;ve had, who had that father, you have a choice. You&#39;re either going to be the person who&#39;s dismissive and critical, or you&#39;re going to marry the person who&#39;s dismissive and critical because you&#39;re seeking to heal. The basic premise of the book is that love is a practice, and the better you get at practicing the stronger your marriage will be. The more patient you are, the more the trust will build. The more the compassion will be there. All the elements that make a marriage great are born out of practicing what we call &#39;the five secrets to lasting love&#39;. The five secrets are based on developmental theory. What I mean by developmental theory is the psychology of what did you need when you were a child that you also needed when you were an adolescent and guess what? You also need it now. So with developmental theory, even though we grow up and we become independent, all the things that we needed in early childhood, we still need today. And so all of the five secrets and in the second half of the book, the practice, are not only explained in the context of what each one means developmentally to you and why it&#39;s important and critical, but also what happens when you don&#39;t get it because you can feed a marriage or starve a marriage. We have this tree in the background, and that&#39;s an element that&#39;s in the parable. There&#39;s a wonderful little fable inside the parable, and there&#39;s a tree, a very magical tree. And the tree really is the marriage. The marriage can either be fed or it can be starved and the tree will reflect it. The marriage itself will reflect if you are feeding it or starving it? And when you practice these five secrets, it&#39;s as if you&#39;re, and I don&#39;t wanna say raising a child, but when you&#39;re raising a child, there are things that that child needs. And if they don&#39;t get those things that they need, there will be huge holes in their development. You can even arrest a child&#39;s development altogether with a certain amount of neglect. I mean, neglect is probably more profound than direct abuse when it comes to a child. Neglect leaves that child with no resources whatsoever and people neglect each other in marriages all the time. People think that having an affair is the big deal, but people ignore each other... They have friendships at work that are really powerful and important -- so called &#39;outside emotional relationships&#39;. There are so many ways that 64 AWARENOW / THE LIGHT EDITION