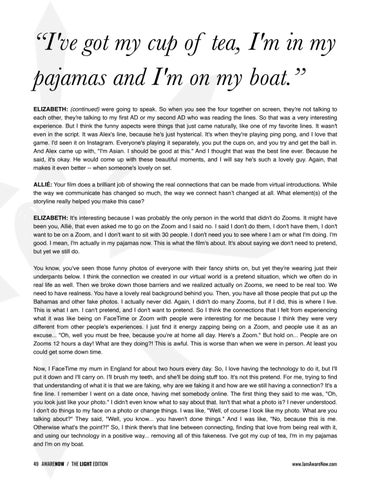 “I&#39;ve got my cup of tea, I&#39;m in my pajamas and I&#39;m on my boat.” ELIZABETH: (continued) were going to speak. So when you see the four together on screen, they&#39;re not talking to each other, they&#39;re talking to my first AD or my second AD who was reading the lines. So that was a very interesting experience. But I think the funny aspects were things that just came naturally, like one of my favorite lines. It wasn&#39;t even in the script. It was Alex&#39;s line, because he&#39;s just hysterical. It&#39;s when they&#39;re playing ping pong, and I love that game. I&#39;d seen it on Instagram. Everyone&#39;s playing it separately, you put the cups on, and you try and get the ball in. And Alex came up with, &quot;I&#39;m Asian. I should be good at this.&quot; And I thought that was the best line ever. Because he said, it&#39;s okay. He would come up with these beautiful moments, and I will say he&#39;s such a lovely guy. Again, that makes it even better -- when someone&#39;s lovely on set.

ALLIÉ: Your film does a brilliant job of showing the real connections that can be made from virtual introductions. While the way we communicate has changed so much, the way we connect hasn’t changed at all. What element(s) of the storyline really helped you make this case?

You know, you&#39;ve seen those funny photos of everyone with their fancy shirts on, but yet they&#39;re wearing just their underpants below. I think the connection we created in our virtual world is a pretend situation, which we often do in real life as well. Then we broke down those barriers and we realized actually on Zooms, we need to be real too. We need to have realness. You have a lovely real background behind you. Then, you have all those people that put up the Bahamas and other fake photos. I actually never did. Again, I didn&#39;t do many Zooms, but if I did, this is where I live. This is what I am. I can&#39;t pretend, and I don&#39;t want to pretend. So I think the connections that I felt from experiencing what it was like being on FaceTime or Zoom with people were interesting for me because I think they were very different from other people&#39;s experiences. I just find it energy zapping being on a Zoom, and people use it as an excuse... &quot;Oh, well you must be free, because you&#39;re at home all day. Here&#39;s a Zoom.&quot; But hold on... People are on Zooms 12 hours a day! What are they doing?! This is awful. This is worse than when we were in person. At least you could get some down time.

Now, I FaceTime my mum in England for about two hours every day. So, I love having the technology to do it, but I&#39;ll put it down and I&#39;ll carry on. I&#39;ll brush my teeth, and she&#39;ll be doing stuff too. It&#39;s not this pretend. For me, trying to find that understanding of what it is that we are faking, why are we faking it and how are we still having a connection? It&#39;s a fine line. I remember I went on a date once, having met somebody online. The first thing they said to me was, &quot;Oh, you look just like your photo.&quot; I didn&#39;t even know what to say about that. Isn&#39;t that what a photo is? I never understood. I don&#39;t do things to my face on a photo or change things. I was like, &quot;Well, of course I look like my photo. What are you talking about?&quot; They said, &quot;Well, you know... you haven&#39;t done things.&quot; And I was like, &quot;No, because this is me. Otherwise what&#39;s the point?!&quot; So, I think there&#39;s that line between connecting, finding that love from being real with it, and using our technology in a positive way... removing all of this fakeness. I&#39;ve got my cup of tea, I&#39;m in my pajamas and I&#39;m on my boat. 49 AWARENOW / THE LIGHT EDITION