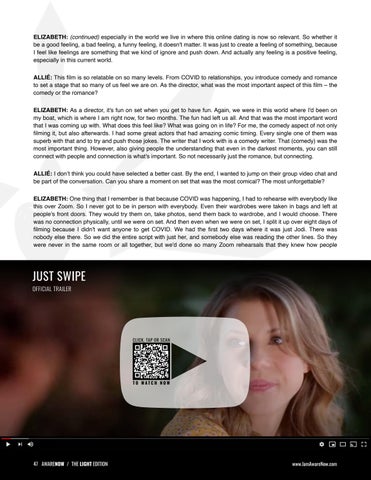 ELIZABETH: (continued) especially in the world we live in where this online dating is now so relevant. So whether it be a good feeling, a bad feeling, a funny feeling, it doesn&#39;t matter. It was just to create a feeling of something, because I feel like feelings are something that we kind of ignore and push down. And actually any feeling is a positive feeling, especially in this current world.

ALLIÉ: This film is so relatable on so many levels. From COVID to relationships, you introduce comedy and romance to set a stage that so many of us feel we are on. As the director, what was the most important aspect of this film – the comedy or the romance?

ELIZABETH: As a director, it&#39;s fun on set when you get to have fun. Again, we were in this world where I&#39;d been on my boat, which is where I am right now, for two months. The fun had left us all. And that was the most important word that I was coming up with. What does this feel like? What was going on in life? For me, the comedy aspect of not only filming it, but also afterwards. I had some great actors that had amazing comic timing. Every single one of them was superb with that and to try and push those jokes. The writer that I work with is a comedy writer. That (comedy) was the most important thing. However, also giving people the understanding that even in the darkest moments, you can still connect with people and connection is what&#39;s important. So not necessarily just the romance, but connecting.

ALLIÉ: I don’t think you could have selected a better cast. By the end, I wanted to jump on their group video chat and be part of the conversation. Can you share a moment on set that was the most comical? The most unforgettable?

ELIZABETH: One thing that I remember is that because COVID was happening, I had to rehearse with everybody like this over Zoom. So I never got to be in person with everybody. Even their wardrobes were taken in bags and left at people&#39;s front doors. They would try them on, take photos, send them back to wardrobe, and I would choose. There was no connection physically, until we were on set. And then even when we were on set, I split it up over eight days of filming because I didn&#39;t want anyone to get COVID. We had the first two days where it was just Jodi. There was nobody else there. So we did the entire script with just her, and somebody else was reading the other lines. So they were never in the same room or all together, but we&#39;d done so many Zoom rehearsals that they knew how people