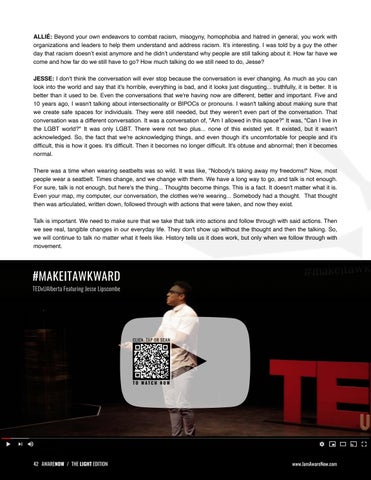 ALLIÉ: Beyond your own endeavors to combat racism, misogyny, homophobia and hatred in general, you work with organizations and leaders to help them understand and address racism. It’s interesting. I was told by a guy the other day that racism doesn’t exist anymore and he didn’t understand why people are still talking about it. How far have we come and how far do we still have to go? How much talking do we still need to do, Jesse?

JESSE: I don&#39;t think the conversation will ever stop because the conversation is ever changing. As much as you can look into the world and say that it&#39;s horrible, everything is bad, and it looks just disgusting... truthfully, it is better. It is better than it used to be. Even the conversations that we&#39;re having now are different, better and important. Five and 10 years ago, I wasn&#39;t talking about intersectionality or BIPOCs or pronouns. I wasn&#39;t talking about making sure that we create safe spaces for individuals. They were still needed, but they weren&#39;t even part of the conversation. That conversation was a different conversation. It was a conversation of, &quot;Am I allowed in this space?&quot; It was, &quot;Can I live in the LGBT world?&quot; It was only LGBT. There were not two plus... none of this existed yet. It existed, but it wasn&#39;t acknowledged. So, the fact that we&#39;re acknowledging things, and even though it&#39;s uncomfortable for people and it&#39;s difficult, this is how it goes. It&#39;s difficult. Then it becomes no longer difficult. It&#39;s obtuse and abnormal; then it becomes normal.

There was a time when wearing seatbelts was so wild. It was like, &quot;Nobody&#39;s taking away my freedoms!&quot; Now, most people wear a seatbelt. Times change, and we change with them. We have a long way to go, and talk is not enough. For sure, talk is not enough, but here&#39;s the thing... Thoughts become things. This is a fact. It doesn&#39;t matter what it is. Even your map, my computer, our conversation, the clothes we&#39;re wearing... Somebody had a thought. That thought then was articulated, written down, followed through with actions that were taken, and now they exist.

Talk is important. We need to make sure that we take that talk into actions and follow through with said actions. Then we see real, tangible changes in our everyday life. They don&#39;t show up without the thought and then the talking. So, we will continue to talk no matter what it feels like. History tells us it does work, but only when we follow through with movement.