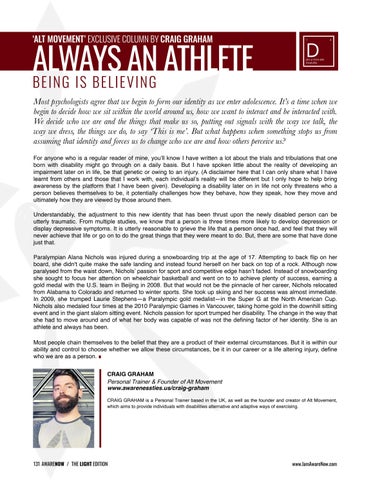 ALWAYS AN ATHLETE BE ING I S BELI EV I NG

Most psychologists agree that we begin to form our identity as we enter adolescence. It’s a time when we begin to decide how we sit within the world around us, how we want to interact and be interacted with. We decide who we are and the things that make us so, putting out signals with the way we talk, the way we dress, the things we do, to say ‘This is me’. But what happens when something stops us from assuming that identity and forces us to change who we are and how others perceive us? For anyone who is a regular reader of mine, you’ll know I have written a lot about the trials and tribulations that one born with disability might go through on a daily basis. But I have spoken little about the reality of developing an impairment later on in life, be that genetic or owing to an injury. (A disclaimer here that I can only share what I have learnt from others and those that I work with, each individual’s reality will be different but I only hope to help bring awareness by the platform that I have been given). Developing a disability later on in life not only threatens who a person believes themselves to be, it potentially challenges how they behave, how they speak, how they move and ultimately how they are viewed by those around them. Understandably, the adjustment to this new identity that has been thrust upon the newly disabled person can be utterly traumatic. From multiple studies, we know that a person is three times more likely to develop depression or display depressive symptoms. It is utterly reasonable to grieve the life that a person once had, and feel that they will never achieve that life or go on to do the great things that they were meant to do. But, there are some that have done just that. Paralympian Alana Nichols was injured during a snowboarding trip at the age of 17. Attempting to back flip on her board, she didn&#39;t quite make the safe landing and instead found herself on her back on top of a rock. Although now paralysed from the waist down, Nichols’ passion for sport and competitive edge hasn’t faded. Instead of snowboarding she sought to focus her attention on wheelchair basketball and went on to to achieve plenty of success, earning a gold medal with the U.S. team in Beijing in 2008. But that would not be the pinnacle of her career, Nichols relocated from Alabama to Colorado and returned to winter sports. She took up skiing and her success was almost immediate. In 2009, she trumped Laurie Stephens—a Paralympic gold medalist—in the Super G at the North American Cup. Nichols also medaled four times at the 2010 Paralympic Games in Vancouver, taking home gold in the downhill sitting event and in the giant slalom sitting event. Nichols passion for sport trumped her disability. The change in the way that she had to move around and of what her body was capable of was not the defining factor of her identity. She is an athlete and always has been.

Most people chain themselves to the belief that they are a product of their external circumstances. But it is within our ability and control to choose whether we allow these circumstances, be it in our career or a life altering injury, define who we are as a person. ∎ CRAIG GRAHAM