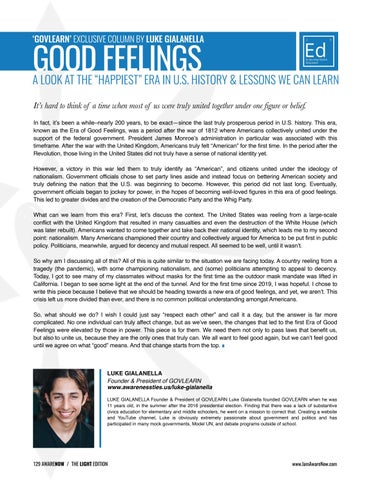 A LOOK AT THE “HAPPIEST” ERA IN U.S. HISTORY &amp; LESSONS WE CAN LEARN It’s hard to think of a time when most of us were truly united together under one figure or belief. In fact, it’s been a while–nearly 200 years, to be exact—since the last truly prosperous period in U.S. history. This era, known as the Era of Good Feelings, was a period after the war of 1812 where Americans collectively united under the support of the federal government. President James Monroe’s administration in particular was associated with this timeframe. After the war with the United Kingdom, Americans truly felt “American” for the first time. In the period after the Revolution, those living in the United States did not truly have a sense of national identity yet.

However, a victory in this war led them to truly identify as “American”, and citizens united under the ideology of nationalism. Government officials chose to set party lines aside and instead focus on bettering American society and truly defining the nation that the U.S. was beginning to become. However, this period did not last long. Eventually, government officials began to jockey for power, in the hopes of becoming well-loved figures in this era of good feelings. This led to greater divides and the creation of the Democratic Party and the Whig Party.

What can we learn from this era? First, let’s discuss the context. The United States was reeling from a large-scale conflict with the United Kingdom that resulted in many casualties and even the destruction of the White House (which was later rebuilt). Americans wanted to come together and take back their national identity, which leads me to my second point: nationalism. Many Americans championed their country and collectively argued for America to be put first in public policy. Politicians, meanwhile, argued for decency and mutual respect. All seemed to be well, until it wasn’t.

So why am I discussing all of this? All of this is quite similar to the situation we are facing today. A country reeling from a tragedy (the pandemic), with some championing nationalism, and (some) politicians attempting to appeal to decency. Today, I got to see many of my classmates without masks for the first time as the outdoor mask mandate was lifted in California. I began to see some light at the end of the tunnel. And for the first time since 2019, I was hopeful. I chose to write this piece because I believe that we should be heading towards a new era of good feelings, and yet, we aren’t. This crisis left us more divided than ever, and there is no common political understanding amongst Americans.

So, what should we do? I wish I could just say “respect each other” and call it a day, but the answer is far more complicated. No one individual can truly affect change, but as we’ve seen, the changes that led to the first Era of Good Feelings were elevated by those in power. This piece is for them. We need them not only to pass laws that benefit us, but also to unite us, because they are the only ones that truly can. We all want to feel good again, but we can’t feel good until we agree on what “good” means. And that change starts from the top. ∎

Founder &amp; President of GOVLEARN www.awarenessties.us/luke-gialanella LUKE GIALANELLA Founder &amp; President of GOVLEARN Luke Gialanella founded GOVLEARN when he was 11 years old, in the summer after the 2016 presidential election. Finding that there was a lack of substantive civics education for elementary and middle schoolers, he went on a mission to correct that. Creating a website and YouTube channel, Luke is obviously extremely passionate about government and politics and has participated in many mock governments, Model UN, and debate programs outside of school.