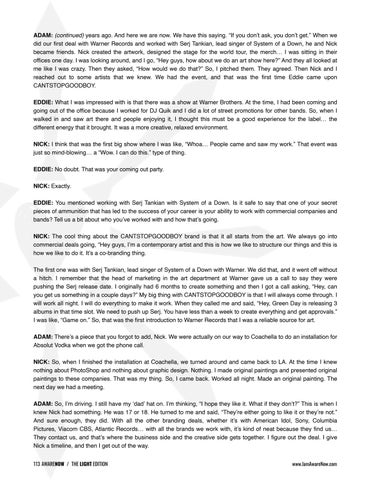 ADAM: (continued) years ago. And here we are now. We have this saying. “If you don’t ask, you don’t get.” When we did our first deal with Warner Records and worked with Serj Tankian, lead singer of System of a Down, he and Nick became friends. Nick created the artwork, designed the stage for the world tour, the merch… I was sitting in their offices one day. I was looking around, and I go, “Hey guys, how about we do an art show here?” And they all looked at me like I was crazy. Then they asked, “How would we do that?” So, I pitched them. They agreed. Then Nick and I reached out to some artists that we knew. We had the event, and that was the first time Eddie came upon CANTSTOPGOODBOY.

EDDIE: What I was impressed with is that there was a show at Warner Brothers. At the time, I had been coming and going out of the office because I worked for DJ Quik and I did a lot of street promotions for other bands. So, when I walked in and saw art there and people enjoying it, I thought this must be a good experience for the label… the different energy that it brought. It was a more creative, relaxed environment.

NICK: I think that was the first big show where I was like, “Whoa… People came and saw my work.” That event was just so mind-blowing… a “Wow. I can do this.” type of thing.

EDDIE: No doubt. That was your coming out party.

EDDIE: You mentioned working with Serj Tankian with System of a Down. Is it safe to say that one of your secret pieces of ammunition that has led to the success of your career is your ability to work with commercial companies and bands? Tell us a bit about who you’ve worked with and how that’s going.

The first one was with Serj Tankian, lead singer of System of a Down with Warner. We did that, and it went off without a hitch. I remember that the head of marketing in the art department at Warner gave us a call to say they were pushing the Serj release date. I originally had 6 months to create something and then I got a call asking, “Hey, can you get us something in a couple days?” My big thing with CANTSTOPGOODBOY is that I will always come through. I will work all night. I will do everything to make it work. When they called me and said, “Hey, Green Day is releasing 3 albums in that time slot. We need to push up Serj. You have less than a week to create everything and get approvals.” I was like, “Game on.” So, that was the first introduction to Warner Records that I was a reliable source for art.

ADAM: There’s a piece that you forgot to add, Nick. We were actually on our way to Coachella to do an installation for Absolut Vodka when we got the phone call.

ADAM: So, I’m driving. I still have my ‘dad’ hat on. I’m thinking, “I hope they like it. What if they don’t?” This is when I knew Nick had something. He was 17 or 18. He turned to me and said, “They’re either going to like it or they’re not.” And sure enough, they did. With all the other branding deals, whether it’s with American Idol, Sony, Columbia Pictures, Viacom CBS, Atlantic Records… with all the brands we work with, it’s kind of neat because they find us… They contact us, and that’s where the business side and the creative side gets together. I figure out the deal. I give Nick a timeline, and then I get out of the way. 113 AWARENOW / THE LIGHT EDITION