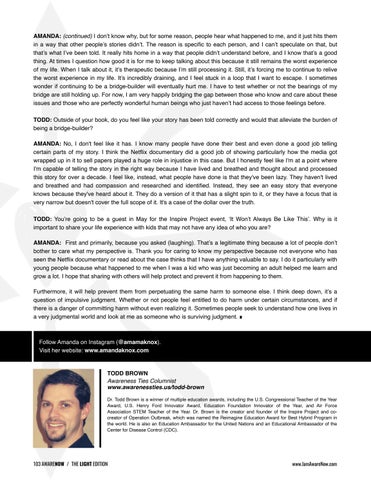 AMANDA: (continued) I don’t know why, but for some reason, people hear what happened to me, and it just hits them in a way that other people’s stories didn’t. The reason is specific to each person, and I can’t speculate on that, but that’s what I’ve been told. It really hits home in a way that people didn’t understand before, and I know that’s a good thing. At times I question how good it is for me to keep talking about this because it still remains the worst experience of my life. When I talk about it, it’s therapeutic because I’m still processing it. Still, it’s forcing me to continue to relive the worst experience in my life. It’s incredibly draining, and I feel stuck in a loop that I want to escape. I sometimes wonder if continuing to be a bridge-builder will eventually hurt me. I have to test whether or not the bearings of my bridge are still holding up. For now, I am very happily bridging the gap between those who know and care about these issues and those who are perfectly wonderful human beings who just haven’t had access to those feelings before.

TODD: Outside of your book, do you feel like your story has been told correctly and would that alleviate the burden of being a bridge-builder?

AMANDA: No, I don&#39;t feel like it has. I know many people have done their best and even done a good job telling certain parts of my story. I think the Netflix documentary did a good job of showing particularly how the media got wrapped up in it to sell papers played a huge role in injustice in this case. But I honestly feel like I&#39;m at a point where I&#39;m capable of telling the story in the right way because I have lived and breathed and thought about and processed this story for over a decade. I feel like, instead, what people have done is that they&#39;ve been lazy. They haven&#39;t lived and breathed and had compassion and researched and identified. Instead, they see an easy story that everyone knows because they&#39;ve heard about it. They do a version of it that has a slight spin to it, or they have a focus that is very narrow but doesn&#39;t cover the full scope of it. It&#39;s a case of the dollar over the truth.

TODD: You’re going to be a guest in May for the Inspire Project event, ‘It Won’t Always Be Like This’. Why is it important to share your life experience with kids that may not have any idea of who you are?

AMANDA: First and primarily, because you asked (laughing). That’s a legitimate thing because a lot of people don’t bother to care what my perspective is. Thank you for caring to know my perspective because not everyone who has seen the Netflix documentary or read about the case thinks that I have anything valuable to say. I do it particularly with young people because what happened to me when I was a kid who was just becoming an adult helped me learn and grow a lot. I hope that sharing with others will help protect and prevent it from happening to them.

Furthermore, it will help prevent them from perpetuating the same harm to someone else. I think deep down, it’s a question of impulsive judgment. Whether or not people feel entitled to do harm under certain circumstances, and if there is a danger of committing harm without even realizing it. Sometimes people seek to understand how one lives in a very judgmental world and look at me as someone who is surviving judgment. ∎

Awareness Ties Columnist www.awarenessties.us/todd-brown Dr. Todd Brown is a winner of multiple education awards, including the U.S. Congressional Teacher of the Year Award, U.S. Henry Ford Innovator Award, Education Foundation Innovator of the Year, and Air Force Association STEM Teacher of the Year. Dr. Brown is the creator and founder of the Inspire Project and cocreator of Operation Outbreak, which was named the Reimagine Education Award for Best Hybrid Program in the world. He is also an Education Ambassador for the United Nations and an Educational Ambassador of the Center for Disease Control (CDC).