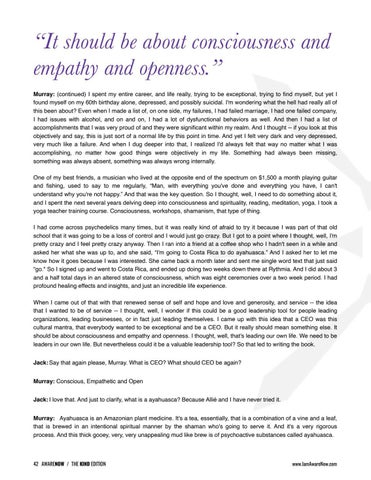 “It should be about consciousness and empathy and openness.”

Murray: (continued) I spent my entire career, and life really, trying to be exceptional, trying to find myself, but yet I found myself on my 60th birthday alone, depressed, and possibly suicidal. I&#39;m wondering what the hell had really all of this been about? Even when I made a list of, on one side, my failures, I had failed marriage, I had one failed company, I had issues with alcohol, and on and on, I had a lot of dysfunctional behaviors as well. And then I had a list of accomplishments that I was very proud of and they were significant within my realm. And I thought -- if you look at this objectively and say, this is just sort of a normal life by this point in time. And yet I felt very dark and very depressed, very much like a failure. And when I dug deeper into that, I realized I&#39;d always felt that way no matter what I was accomplishing, no matter how good things were objectively in my life. Something had always been missing, something was always absent, something was always wrong internally.

One of my best friends, a musician who lived at the opposite end of the spectrum on $1,500 a month playing guitar and fishing, used to say to me regularly, “Man, with everything you&#39;ve done and everything you have, I can&#39;t understand why you&#39;re not happy.” And that was the key question. So I thought, well, I need to do something about it, and I spent the next several years delving deep into consciousness and spirituality, reading, meditation, yoga. I took a yoga teacher training course. Consciousness, workshops, shamanism, that type of thing.

I had come across psychedelics many times, but it was really kind of afraid to try it because I was part of that old school that it was going to be a loss of control and I would just go crazy. But I got to a point where I thought, well, I&#39;m pretty crazy and I feel pretty crazy anyway. Then I ran into a friend at a coffee shop who I hadn&#39;t seen in a while and asked her what she was up to, and she said, “I&#39;m going to Costa Rica to do ayahuasca.” And I asked her to let me know how it goes because I was interested. She came back a month later and sent me single word text that just said “go.&quot; So I signed up and went to Costa Rica, and ended up doing two weeks down there at Rythmia. And I did about 3 and a half total days in an altered state of consciousness, which was eight ceremonies over a two week period. I had profound healing effects and insights, and just an incredible life experience.

When I came out of that with that renewed sense of self and hope and love and generosity, and service -- the idea that I wanted to be of service -- I thought, well, I wonder if this could be a good leadership tool for people leading organizations, leading businesses, or in fact just leading themselves. I came up with this idea that a CEO was this cultural mantra, that everybody wanted to be exceptional and be a CEO. But it really should mean something else. It should be about consciousness and empathy and openness. I thought, well, that&#39;s leading our own life. We need to be leaders in our own life. But nevertheless could it be a valuable leadership tool? So that led to writing the book.

Jack: Say that again please, Murray. What is CEO? What should CEO be again?

Jack: I love that. And just to clarify, what is a ayahuasca? Because Allié and I have never tried it.

Murray: Ayahuasca is an Amazonian plant medicine. It&#39;s a tea, essentially, that is a combination of a vine and a leaf, that is brewed in an intentional spiritual manner by the shaman who&#39;s going to serve it. And it&#39;s a very rigorous process. And this thick gooey, very, very unappealing mud like brew is of psychoactive substances called ayahuasca.