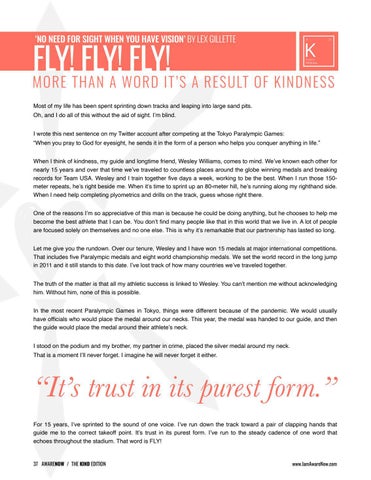 MORE THAN A WORD IT’S A RESULT OF KINDNESS Most of my life has been spent sprinting down tracks and leaping into large sand pits.

Oh, and I do all of this without the aid of sight. I’m blind.

“When you pray to God for eyesight, he sends it in the form of a person who helps you conquer anything in life.”

When I think of kindness, my guide and longtime friend, Wesley Williams, comes to mind. We’ve known each other for nearly 15 years and over that time we’ve traveled to countless places around the globe winning medals and breaking records for Team USA. Wesley and I train together five days a week, working to be the best. When I run those 150meter repeats, he’s right beside me. When it’s time to sprint up an 80-meter hill, he’s running along my righthand side. When I need help completing plyometrics and drills on the track, guess whose right there.

One of the reasons I’m so appreciative of this man is because he could be doing anything, but he chooses to help me become the best athlete that I can be. You don’t find many people like that in this world that we live in. A lot of people are focused solely on themselves and no one else. This is why it’s remarkable that our partnership has lasted so long.

Let me give you the rundown. Over our tenure, Wesley and I have won 15 medals at major international competitions. That includes five Paralympic medals and eight world championship medals. We set the world record in the long jump in 2011 and it still stands to this date. I’ve lost track of how many countries we’ve traveled together.

The truth of the matter is that all my athletic success is linked to Wesley. You can’t mention me without acknowledging him. Without him, none of this is possible.

I stood on the podium and my brother, my partner in crime, placed the silver medal around my neck.

“It’s trust in its purest form.”

For 15 years, I’ve sprinted to the sound of one voice. I’ve run down the track toward a pair of clapping hands that guide me to the correct takeoff point. It’s trust in its purest form. I’ve run to the steady cadence of one word that echoes throughout the stadium. That word is FLY!