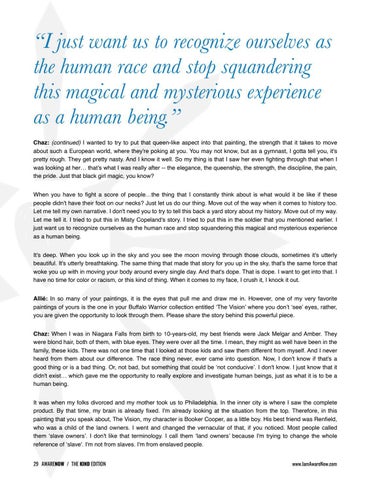 “I just want us to recognize ourselves as the human race and stop squandering this magical and mysterious experience as a human being.”

Chaz: (continued) I wanted to try to put that queen-like aspect into that painting, the strength that it takes to move about such a European world, where they&#39;re poking at you. You may not know, but as a gymnast, I gotta tell you, it&#39;s pretty rough. They get pretty nasty. And I know it well. So my thing is that I saw her even fighting through that when I was looking at her… that’s what I was really after -- the elegance, the queenship, the strength, the discipline, the pain, the pride. Just that black girl magic, you know?

When you have to fight a score of people…the thing that I constantly think about is what would it be like if these people didn&#39;t have their foot on our necks? Just let us do our thing. Move out of the way when it comes to history too. Let me tell my own narrative. I don&#39;t need you to try to tell this back a yard story about my history. Move out of my way. Let me tell it. I tried to put this in Misty Copeland&#39;s story. I tried to put this in the soldier that you mentioned earlier. I just want us to recognize ourselves as the human race and stop squandering this magical and mysterious experience as a human being.

It&#39;s deep. When you look up in the sky and you see the moon moving through those clouds, sometimes it&#39;s utterly beautiful. It&#39;s utterly breathtaking. The same thing that made that story for you up in the sky, that&#39;s the same force that woke you up with in moving your body around every single day. And that&#39;s dope. That is dope. I want to get into that. I have no time for color or racism, or this kind of thing. When it comes to my face, I crush it, I knock it out.

Allié: In so many of your paintings, it is the eyes that pull me and draw me in. However, one of my very favorite paintings of yours is the one in your Buffalo Warrior collection entitled ‘The Vision’ where you don’t ‘see’ eyes, rather, you are given the opportunity to look through them. Please share the story behind this powerful piece.

Chaz: When I was in Niagara Falls from birth to 10-years-old, my best friends were Jack Melgar and Amber. They were blond hair, both of them, with blue eyes. They were over all the time. I mean, they might as well have been in the family, these kids. There was not one time that I looked at those kids and saw them different from myself. And I never heard from them about our difference. The race thing never, ever came into question. Now, I don&#39;t know if that&#39;s a good thing or is a bad thing. Or, not bad, but something that could be ‘not conducive’. I don&#39;t know. I just know that it didn&#39;t exist… which gave me the opportunity to really explore and investigate human beings, just as what it is to be a human being.

It was when my folks divorced and my mother took us to Philadelphia. In the inner city is where I saw the complete product. By that time, my brain is already fixed. I&#39;m already looking at the situation from the top. Therefore, in this painting that you speak about, The Vision, my character is Booker Cooper, as a little boy. His best friend was Renfield, who was a child of the land owners. I went and changed the vernacular of that, if you noticed. Most people called them ‘slave owners’. I don&#39;t like that terminology. I call them ‘land owners’ because I&#39;m trying to change the whole reference of ‘slave&#39;. I&#39;m not from slaves. I&#39;m from enslaved people. 29 AWARENOW / THE KIND EDITION