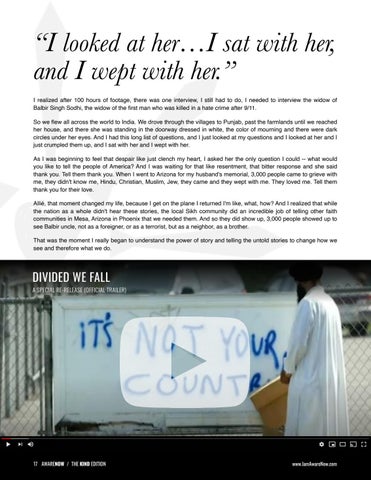 “I looked at her…I sat with her,

and I wept with her.”

I realized after 100 hours of footage, there was one interview, I still had to do, I needed to interview the widow of Balbir Singh Sodhi, the widow of the first man who was killed in a hate crime after 9/11.

So we flew all across the world to India. We drove through the villages to Punjab, past the farmlands until we reached her house, and there she was standing in the doorway dressed in white, the color of mourning and there were dark circles under her eyes. And I had this long list of questions, and I just looked at my questions and I looked at her and I just crumpled them up, and I sat with her and I wept with her.

As I was beginning to feel that despair like just clench my heart, I asked her the only question I could -- what would you like to tell the people of America? And I was waiting for that like resentment, that bitter response and she said thank you. Tell them thank you. When I went to Arizona for my husband&#39;s memorial, 3,000 people came to grieve with me, they didn&#39;t know me, Hindu, Christian, Muslim, Jew, they came and they wept with me. They loved me. Tell them thank you for their love.

Allié, that moment changed my life, because I get on the plane I returned I&#39;m like, what, how? And I realized that while the nation as a whole didn&#39;t hear these stories, the local Sikh community did an incredible job of telling other faith communities in Mesa, Arizona in Phoenix that we needed them. And so they did show up, 3,000 people showed up to see Balbir uncle, not as a foreigner, or as a terrorist, but as a neighbor, as a brother.

That was the moment I really began to understand the power of story and telling the untold stories to change how we see and therefore what we do.