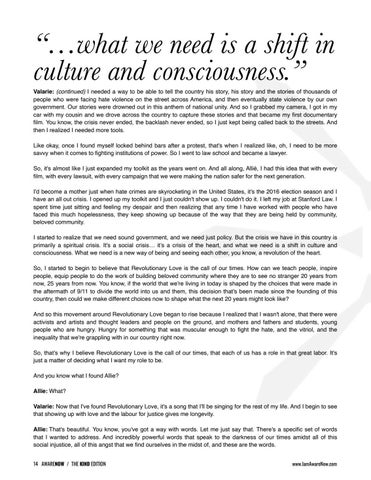 “…what we need is a shift in culture and consciousness.”

Valarie: (continued) I needed a way to be able to tell the country his story, his story and the stories of thousands of people who were facing hate violence on the street across America, and then eventually state violence by our own government. Our stories were drowned out in this anthem of national unity. And so I grabbed my camera, I got in my car with my cousin and we drove across the country to capture these stories and that became my first documentary film. You know, the crisis never ended, the backlash never ended, so I just kept being called back to the streets. And then I realized I needed more tools.

Like okay, once I found myself locked behind bars after a protest, that&#39;s when I realized like, oh, I need to be more savvy when it comes to fighting institutions of power. So I went to law school and became a lawyer.

So, it&#39;s almost like I just expanded my toolkit as the years went on. And all along, Allié, I had this idea that with every film, with every lawsuit, with every campaign that we were making the nation safer for the next generation.

I&#39;d become a mother just when hate crimes are skyrocketing in the United States, it&#39;s the 2016 election season and I have an all out crisis. I opened up my toolkit and I just couldn&#39;t show up. I couldn&#39;t do it. I left my job at Stanford Law. I spent time just sitting and feeling my despair and then realizing that any time I have worked with people who have faced this much hopelessness, they keep showing up because of the way that they are being held by community, beloved community.

I started to realize that we need sound government, and we need just policy. But the crisis we have in this country is primarily a spiritual crisis. It&#39;s a social crisis… it’s a crisis of the heart, and what we need is a shift in culture and consciousness. What we need is a new way of being and seeing each other, you know, a revolution of the heart.

So, I started to begin to believe that Revolutionary Love is the call of our times. How can we teach people, inspire people, equip people to do the work of building beloved community where they are to see no stranger 20 years from now, 25 years from now. You know, if the world that we&#39;re living in today is shaped by the choices that were made in the aftermath of 9/11 to divide the world into us and them, this decision that&#39;s been made since the founding of this country, then could we make different choices now to shape what the next 20 years might look like?

And so this movement around Revolutionary Love began to rise because I realized that I wasn&#39;t alone, that there were activists and artists and thought leaders and people on the ground, and mothers and fathers and students, young people who are hungry. Hungry for something that was muscular enough to fight the hate, and the vitriol, and the inequality that we&#39;re grappling with in our country right now.

So, that&#39;s why I believe Revolutionary Love is the call of our times, that each of us has a role in that great labor. It&#39;s just a matter of deciding what I want my role to be.

And you know what I found Allie?

Valarie: Now that I&#39;ve found Revolutionary Love, it&#39;s a song that I&#39;ll be singing for the rest of my life. And I begin to see that showing up with love and the labour for justice gives me longevity.

Allie: That&#39;s beautiful. You know, you&#39;ve got a way with words. Let me just say that. There&#39;s a specific set of words that I wanted to address. And incredibly powerful words that speak to the darkness of our times amidst all of this social injustice, all of this angst that we find ourselves in the midst of, and these are the words. 14 AWARENOW / THE KIND EDITION