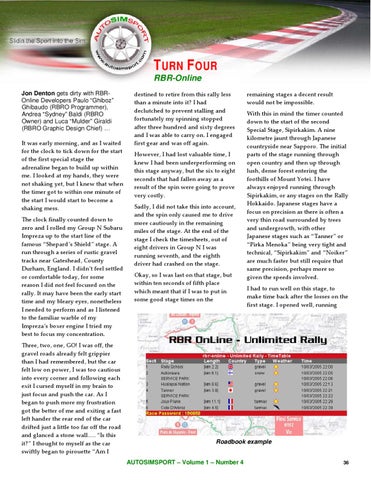 T URN F OUR RBR-Online Jon Denton gets dirty with RBROnline Developers Paulo “Ghiboz” Ghibaudo (RBRO Programmer), Andrea “Sydney” Baldi (RBRO Owner) and Luca “Mulder” Giraldi (RBRO Graphic Design Chief) … It was early morning, and as I waited for the clock to tick down for the start of the first special stage the adrenaline began to build up within me. I looked at my hands, they were not shaking yet, but I knew that when the timer got to within one minute of the start I would start to become a shaking mess. The clock finally counted down to zero and I rolled my Group N Subaru Impreza up to the start line of the famous “Shepard’s Shield” stage. A run through a series of rustic gravel tracks near Gateshead, County Durham, England. I didn’t feel settled or comfortable today, for some reason I did not feel focused on the rally. It may have been the early start time and my bleary eyes, nonetheless I needed to perform and as I listened to the familiar warble of my Impreza’s boxer engine I tried my best to focus my concentration. Three, two, one, GO! I was off, the gravel roads already felt grippier than I had remembered, but the car felt low on power, I was too cautious into every corner and following each exit I cursed myself in my brain to just focus and push the car. As I began to push more my frustration got the better of me and exiting a fast left hander the rear end of the car drifted just a little too far off the road and glanced a stone wall…. “Is this it?” I thought to myself as the car swiftly began to pirouette “Am I

destined to retire from this rally less than a minute into it? I had declutched to prevent stalling and fortunately my spinning stopped after three hundred and sixty degrees and I was able to carry on. I engaged first gear and was off again. However, I had lost valuable time, I knew I had been underperforming on this stage anyway, but the six to eight seconds that had fallen away as a result of the spin were going to prove very costly. Sadly, I did not take this into account, and the spin only caused me to drive more cautiously in the remaining miles of the stage. At the end of the stage I check the timesheets, out of eight drivers in Group N I was running seventh, and the eighth driver had crashed on the stage. Okay, so I was last on that stage, but within ten seconds of fifth place which meant that if I was to put in some good stage times on the

remaining stages a decent result would not be impossible. With this in mind the timer counted down to the start of the second Special Stage, Sipirkakim. A nine kilometre jaunt through Japanese countryside near Sapporo. The initial parts of the stage running through open country and then up through lush, dense forest entering the foothills of Mount Yotei. I have always enjoyed running through Sipirkakim, or any stages on the Rally Hokkaido. Japanese stages have a focus on precision as there is often a very thin road surrounded by trees and undergrowth, with other Japanese stages such as “Tanner” or “Pirka Menoka” being very tight and technical, “Sipirkakim” and “Noiker” are much faster but still require that same precision, perhaps more so given the speeds involved. I had to run well on this stage, to make time back after the losses on the first stage. I opened well, running 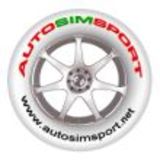