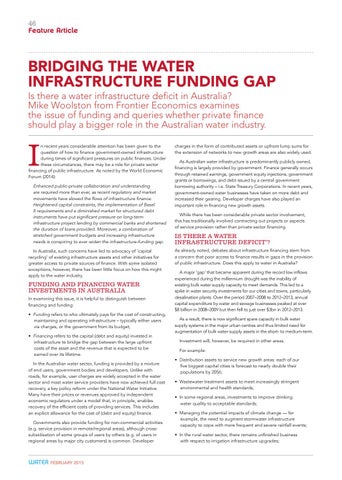 BRIDGING THE WATER INFRASTRUCTURE FUNDING GAP Is there a water infrastructure deficit in Australia? Mike Woolston from Frontier Economics examines the issue of funding and queries whether private finance should play a bigger role in the Australian water industry.

n recent years considerable attention has been given to the question of how to finance government-owned infrastructure during times of significant pressures on public finances. Under these circumstances, there may be a role for private sector financing of public infrastructure. As noted by the World Economic Forum (2014): Enhanced public-private collaboration and understanding are required more than ever, as recent regulatory and market movements have slowed the flows of infrastructure finance. Heightened capital constraints, the implementation of Basel II requirements and a diminished market for structured debt instruments have put significant pressure on long-term infrastructure project lending by commercial banks and shortened the duration of loans provided. Moreover, a combination of stretched government budgets and increasing infrastructure needs is conspiring to ever widen the infrastructure-funding gap. In Australia, such concerns have led to advocacy of ‘capital recycling’ of existing infrastructure assets and other initiatives for greater access to private sources of finance. With some isolated exceptions, however, there has been little focus on how this might apply to the water industry.

Funding and financing water investments in Australia In examining this issue, it is helpful to distinguish between financing and funding: • Funding refers to who ultimately pays for the cost of constructing, maintaining and operating infrastructure – typically either users via charges, or the government from its budget; • Financing refers to the capital (debt and equity) invested in infrastructure to bridge the gap between the large upfront costs of the asset and the revenue that is expected to be earned over its lifetime. In the Australian water sector, funding is provided by a mixture of end users, government bodies and developers. Unlike with roads, for example, user charges are widely accepted in the water sector and most water service providers have now achieved full cost recovery, a key policy reform under the National Water Initiative. Many have their prices or revenues approved by independent economic regulators under a model that, in principle, enables recovery of the efficient costs of providing services. This includes an explicit allowance for the cost of (debt and equity) finance. Governments also provide funding for non-commercial activities (e.g. service provision in remote/regional areas), although crosssubsidisation of some groups of users by others (e.g. of users in regional areas by major city customers) is common. Developer

charges in the form of contributed assets or upfront lump sums for the extension of networks to new growth areas are also widely used. As Australian water infrastructure is predominantly publicly owned, financing is largely provided by government. Finance generally occurs through retained earnings, government equity injections, government grants or borrowings, and debt issued by a central government borrowing authority – i.e. State Treasury Corporations. In recent years, government-owned water businesses have taken on more debt and increased their gearing. Developer charges have also played an important role in financing new growth assets. While there has been considerable private sector involvement, this has traditionally involved contracting out projects or aspects of service provision rather than private sector financing.

Is there a water infrastructure deficit’? As already noted, debates about infrastructure financing stem from a concern that poor access to finance results in gaps in the provision of public infrastructure. Does this apply to water in Australia? A major ‘gap’ that became apparent during the record low inflows experienced during the millennium drought was the inability of existing bulk water supply capacity to meet demands. This led to a spike in water security investments for our cities and towns, particularly desalination plants. Over the period 2007–2008 to 2012–2013, annual capital expenditure by water and sewage businesses peaked at over $8 billion in 2008–2009 but then fell to just over $3bn in 2012–2013. As a result, there is now significant spare capacity in bulk water supply systems in the major urban centres and thus limited need for augmentation of bulk water supply assets in the short- to medium-term. Investment will, however, be required in other areas. For example: • Distribution assets to service new growth areas: each of our five biggest capital cities is forecast to nearly double their populations by 2056; • Wastewater treatment assets to meet increasingly stringent environmental and health standards; • In some regional areas, investments to improve drinking water quality to acceptable standards; • Managing the potential impacts of climate change — for example, the need to augment stormwater infrastructure capacity to cope with more frequent and severe rainfall events; • In the rural water sector, there remains unfinished business with respect to irrigation infrastructure upgrades;

Our cover theme this issue is on Financing Water Infrastructure – and the authors of our feature articles focus on the question of funding and whether private equity is the way to go. Read the articles and let us know what you think. This issue also includes features and technical papers on a range of topics such as Integrated Catchment Management, Stormwater Treatment & Management and Energy Efficiency. 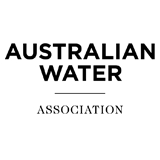