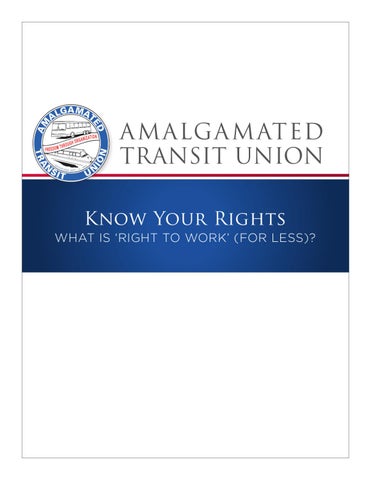 A M ALGA M ATED TRANSIT UNION Know Your Rights WHAT IS ‘RIGHT TO WORK’ (FOR LESS)?

he U.S. National Labor Relations Act (NLRA) permits unions to operate under a “union shop” rule, which requires all new unionrepresented employees to join the union within a minimum period of time after being hired (these agreements are generally referred to as “union security agreements”).

laws have a consistently lower quality of life than in other states; significantly lower wages, higher poverty and infant mortality rates, less access to health care, and lower levels of funding for education.

No RTW Laws in Canada

A similar arrangement to the “union shop” is the “agency shop,” under which employees must pay the equivalent of union dues, but need not formally join the union. The idea behind union or agency shop arrangements is to prevent the existence of free riders – workers who benefit from union contracts without having to pay for the union’s efforts.

Similar restrictions are not permitted in Canada. Legal precedent within Canada has recognized that an individual who is not a union member has no constitutional protection against the effect of a negotiated agreement requiring union membership as a condition of employment. See Arlington Crane Service Ltd. v. Ontario (Ministry of Labour), (1988), 67 O.R. (2d) 225 (H.C.J.).]

‘Right to Work’ Laws The U.S. Congress, however, later enacted a restriction to union and agency shop arrangements by adding language to the NLRA which provides that “[n]othing in this Act shall be construed as authorizing the execution or application of agreements requiring membership in a labor organization as a condition of employment in any State or Territory in which such execution or application is prohibited by State or Territorial law.” This new language empowers individual states to put restrictions on unionsecurity agreements. Subsequently, 22 states have placed statutory and/or constitutional encumbrances upon unionsecurity arrangements through so-called “right-towork” (RTW) laws.

‘Mutuality of Obligation’ Generally, the law requires that unions fairly represent members and nonmembers alike. RTW laws, however, commonly enable non-member employees working in a unionized setting to reap the benefits of union representation without having to contribute toward the cost of those benefits. Courts in certain jurisdictions, however, have addressed the financial inequities these freeloaders impose when they need representation. For example, the Nevada Supreme Court has expressly stated its “disagree[ment] with the National Labor Relations Board’s (‘NLRB’) conclusion that an exclusive bargaining agent cannot charge nonmembers fees for individual grievance representation.”

RTW laws have nothing to do with the right of an individual to seek and accept gainful employment. Rather, these deceptively-named statutes forbid the negotiation of an agreement between the union and the employer which would obligate non-member employees to pay dues and/or fees to the union for the benefits they receive by being represented by the union – even if a majority of the workers in the bargaining unit have selected the union as their exclusive representative.

See Cone v. Nevada Service Employees/SEIU Local 1107, 998 P.2d 1178, 1183 (Nev. 2000). The Cone decision (above) recognized that prohibiting unions from charging non-members a service fee for the reasonable costs of individual grievances would essentially require “union members to shoulder the burden of costs associated with nonunion members’ individual grievance representation.” Rather, the court in Cone noted a “mutuality of obligation” in which a “union has the obligation to represent all employees in the bargaining unit without regard to union membership, and the employee has a

RTW laws weaken the foundation of collective bargaining in an attempt to reduce the effectiveness of unions in negotiations with management. It is, therefore, no coincidence that many employer groups and anti-union lawmakers support RTW laws which they hope will undermine the power of wage-earners by strengthening the hand of employers. Indeed, studies have shown that workers in states with “right to work” 2

corresponding obligation . . . to share in defraying the costs of collective bargaining services from which he or she directly benefits.â&#x20AC;? Unfortunately, not every jurisdiction has realized the mutuality of obligation underlying exclusive bargaining relationships expressed in Cone, which is why we should all take a moment to reflect on the value of having a job with ATU representation. Despite the attempts of certain employers to compromise the foundation of our great Union, the ATU has consistently improved the quality of life for its members, their families, and their local communities through better wages, affordable health benefits, pensions, and workplace safety standards in addition to the provision of safe, quality transportation services to our passengers.

Know Your Rights WHAT IS ‘RIGHT TO WORK’ (FOR LESS)? Similar restrictions are not permitted in Canada. Legal precedent within Canada has rec...

Know Your Rights WHAT IS ‘RIGHT TO WORK’ (FOR LESS)? Similar restrictions are not permitted in Canada. Legal precedent within Canada has rec...