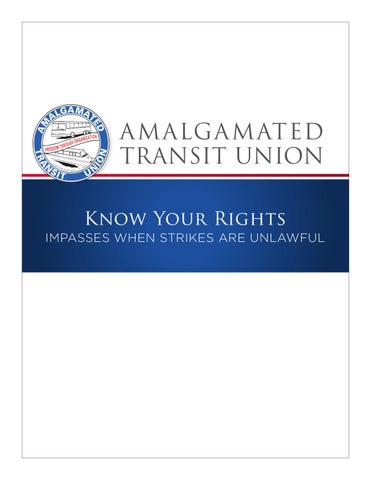 hen a union and a private sector employer are unable to agree upon the terms of a new labor contract, the available options are fairly straightforward. Once an impasse is reached at the negotiation table (and provided it has afforded the required notice through the Federal Mediation and Conciliation Service), the union can stage a strike.

Interest Arbitration Under the first, interest arbitration, a neutral party or a panel of arbitrators considers the positions and arguments of each party and issues a ruling that establishes the particulars of a new contract. In some instances, the matters subject to such a binding determination are limited to, or exclude, economic wages and benefits.

The employer has a similar, although rarely utilized, right to impose a “lockout” and temporarily cease operations (or otherwise continue limited services with only non-bargaining unit personnel).

A variation of this “final offer” arbitration requires that the arbitrator pick between the competing proposals of the parties, either on a subject-by-subject or entire package basis. For more than a century now, the ATU’s Constitution has supported interest arbitration as a peaceful means of resolving contract disputes without any interruption in service to the public. Many Section 13(c)agreements therefore include an interest arbitration clause which can bind a public employer even where the applicable state statute is entirely silent on the subject of negotiation impasses.

Story Can Be Different for ATU Members The story can be quite different, however, for the many ATU members in the U.S. who work directly for a state, county, or local government or for a transit authority itself. Statutes in a small handful of states do grant a strike right to public employees (other than police and firefighters) once certain stated conditions are met. Such legislation is, however, by far the exception than the rule.

But the Reagan Administration, and the firing of the federal air traffic controllers for engaging in an illegal strike, brought a changed attitude toward interestarbitration on the part of the Department of Labor.

More typically, public sector collective bargaining laws expressly forbid an employee work stoppage. And as media reports of the job action by transit workers in New York City this past December reminded us, in some instances the applicable law specifi cally calls for fi ning those public employees who engage in a strike.

‘Fact-Finding’ Despite legal challenges by the ATU, then, scores of employee protection arrangements have more recently adopted the second strike alternative, which has proven more popular with state legislatures – “fact-finding.”

Is There Legal Recourse?

The specific options available will vary from one circumstance to another, depending upon the particular statute that applies and, in some cases, the “Section 13(c)” protections that may attach to any federal transit funding the employer has received.

Fact-finding is most easily understood as non-binding interest arbitration. The procedures followed are much the same and include a hearing on the order of those seen in grievance arbitrations. The outcome, however, is only an advisory opinion. The employer has the right to reject the fact-fi nder’s recommendations and impose its proposed contract terms, although (at least in theory) at the risk of negative public reaction.

Generally speaking, the alternative procedural responses to an unresolved “interest” dispute (a difference over the terms to be included in a collective bargaining agreement, as opposed to a “rights” or grievance dispute, which concerns the proper interpretation or application of an existing labor contract) fall into two categories.

Some public employee bargaining laws actually incorporate a mix of procedures. The statute that governs labor relations between Local 732 and the Atlanta transit system, for instance, provides for fact-finding that can be followed by proceedings before a local judge very much on the order of interest arbitration.

Unfortunately, there is no single answer.

Because the available impasse procedures vary significantly from one particular circumstance to the next, it is obviously important for unionized public employees to understand what specific options might be available in their case if a contract settlement cannot be reached. While the substance of negotiations cannot fall victim to such concerns, the bargaining process also should not be undertaken without any regard for them.

Know Your Rights IMPASSES WHEN STRIKES ARE UNLAWFUL ‘Fact-Finding’ The story can be quite different, however, for the many ATU members in th...

Know Your Rights IMPASSES WHEN STRIKES ARE UNLAWFUL ‘Fact-Finding’ The story can be quite different, however, for the many ATU members in th...