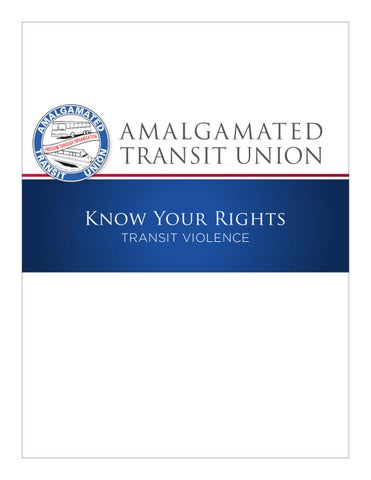 iolence against transit workers continues to plague our industry. In Pennsylvania recently, a Lehigh and Northampton Transportation Authority bus driver was punched repeatedly after asking a passenger to remove his feet from a seat. In another incident, a group of young men were smashing windows on a bus and as the Chicago Transit Authority bus driver opened the doors to let riders off, the men came onto the bus and attacked the driver and at least one passenger.

a passenger or employee at the time of the offense, the 20-year maximum is removed and the offender can be imprisoned for any term of years, life, or death. The law goes further and states that if the offense results in the death of any person, the perpetrator shall be imprisoned for life, or subject to the death penalty. Many states have implemented similar laws. Generally, states have amended their assault laws to increase penalties. In some states, not only have the penalties increased, but the assault is classified as a felony rather than a misdemeanor when it is against a transit worker. Being convicted of a felony instead of a misdemeanor often comes with more restrictions such as losing the right to vote, or being prohibited from owning a gun.

Violent acts, as well as the fear of violence, have a tremendous effect on transit systems. The most immediate, and irreversible effect is the physical, emotional and financial suffering of the victims and their families. But also detrimental to public transit are the resulting lost workdays, revenue decreases, equipment damages and negative impact on the publicâ&#x20AC;&#x2122;s decision to use mass transportation services.

Crime Statistics One of the most common crimes afflicting the transit system is disorderly conduct, which carries the risk of escalating into a more serious problem. Theft, assault, and fare disputes are also amongst the top concerns that transportation workers face. Efforts are being made to decrease transit violence through the installation of security cameras and increased police presence. In addition, the laws discussed below seek to deter crime by increasing the punishment for those who engage in the violence.

Government Response In the United States, both the federal and state governments have enacted laws aimed at eliminating violence against transit workers. Although the Canadian Council continues to lobby for similar protection, in Canada, no similar federal or provincial law currently exists. In 2001, the United States Congress enacted legislation that makes it a felony to assault a bus operator or passenger. Under this law, any person who interferes with or incapacitates transit operators while they are performing their duties will be fined, imprisoned up to 20 years, or both. If the mass transit vehicle was carrying 2