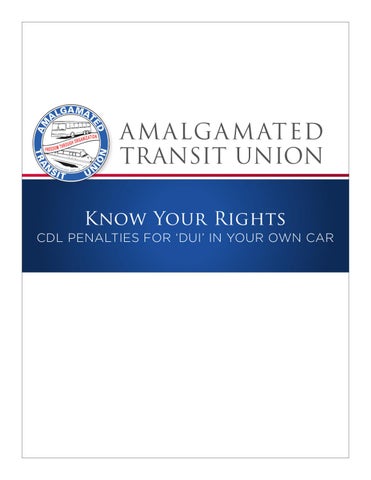 ection 201(b) of the Motor Carrier Safety Improvement Act of 1999 (MCSIA) revised the Commercial Drivers License (CDL) standards imposing harsher disqualification standards. Among its revisions, the Act requires CDL holders to be disqualified if they are convicted of adrug or alcoholrelated offense, such as driving under the influence, committed while operating a non-Commercial Motor Vehicle (CMV). For a first time conviction of either driving under the influence of alcohol or a controlled substance (or of refusing to submit to a sobriety test), the Act imposes an automatic one-year disqualification from operating a CMV even if the offense was committed using a personal vehicle.A second such conviction shall disqualify that individual from operating a commercial motor vehicle for life.

entered and successfully completed an appropriate rehabilitation program approved by the state. Any person who has received such reinstatement but is subsequently convicted of an additional disqualifying offense is strictly prohibited from qualifying for a potential state reinstatement of CMV operating privileges. Certainly, though perhaps indicative of responsibilities associated with their work, our CDL-holding brothers and sisters are being held to a standard higher than that of the general public, both in their professional lives as drivers, and in their personal lives. Those affected individuals, however, must be aware that a conviction for driving under the influence while operating any motor vehicle could have a significant adverse impact on a driving career.

Reinstatement Possible Nevertheless, the Act provides that a state may reinstate a driver subject to a lifetime disqualification after a period of 10 years if that person has voluntarily

Know Your Rights CDL PENALTIES FOR ‘DUI’ IN YOUR OWN CAR Improvement Act of 1999 (MCSIA) revised the Commercial Drivers License (CDL) standa...

Know Your Rights CDL PENALTIES FOR ‘DUI’ IN YOUR OWN CAR Improvement Act of 1999 (MCSIA) revised the Commercial Drivers License (CDL) standa...