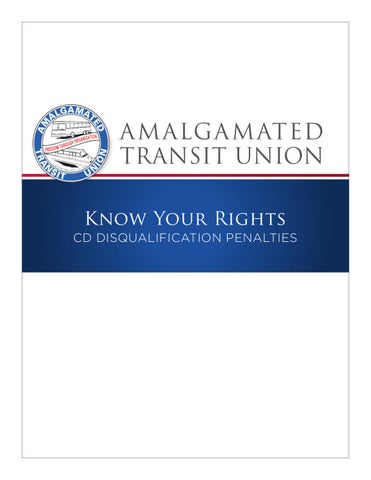 • Driving a CMV if the driver’s CDL has been revoked, suspended, or canceled, or if the driver has been disqualied from operating a CMV

A Summary of Changes in Federal and State Laws As of October 1, 2005, individuals holding a commercial driver’s license (CDL) in the United States are subject to harsh new disqualification penalties and other restrictions that could result in the loss of their CDL. Under these new regulations, a driver may have his or her CDL suspended or revoked if they are convicted of certain offenses or trafic violations in either a commercial motor vehicle (CMV) or in their own personal car or other non-commercial motor vehicle (non-CMV).

• Causing a fatality through the negligent operation of a CMV • Upon a first conviction of the following disqualifying offense committed while operating a CMV, an individual will have their CDL immediately suspended for life and will not be eligible for the 10-year reinstatement: • Using a vehicle in the commission of a felony involving manufacturing distributing, or dispensing a controlled substance

In addition, states are now prohibited from masking, deferring imposition of judgement, or allowing an individual to enter into a diversion program that would prevent a CDL holder’s conviction for any of the disqualifying offenses from appearing on the driver’s record.

Serious Traffic Violations in a non-CMV:

Below is a summary of all of the federal disqualication offenses and violations and the required suspension periods. It is important to note that the federal regulations are only a minimum requirement and States have the authority to implement additional disquali. cation penalties for CDL holders. And finally, the ATU is working with other transportation unions to modify the “no-masking” rule.

Major Disqualifying Offenses in a non-CMV:

Upon a first conviction of any of the following disqualifying offenses committed while operating a CMV, an individual will have their CDL immediately suspended for one year. A second conviction will result in a lifetime suspension (States may allow for resinstatement after 10 years in certain circumstances):

• Following the vehicle ahead too closely

• Driving a CMV without obtaining a CDL

• Having an alcohol concentration of 0.04 or greater while operating a CMV

• Driving a CMV without a CDL in the driver’s posession (an individual will not be guilty of this offense if they provide proof to the enforcement authority that issued the citation, by the date indicated on the citation, that the individual held a valid CDL on the date the citation was issued)

• Using a vehicle to commit a felony 2

Railroad Crossing Violations in a CMV:

The revisions to the federal regulations allow FMCSA to immediately disqualify an individual from operating a CMV if it determines that the driver poses an â&#x20AC;&#x153;imminent hazardâ&#x20AC;? - a condition that presents a likelihood of death, serious personal injury, or substantial danger to the public. The period of disqualification under this provision may not exceed 30 days unless the driver has been notified of the opportunity for a hearing to present a defense to the proposed disqualication.