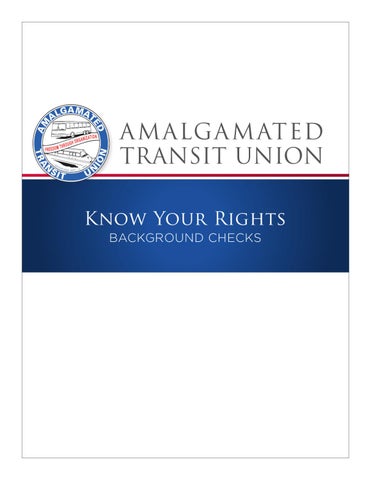 ith union workers in the transit and school bus industries increasingly targeted for criminal background checks, it is now more important than ever for ATU members to be educated consumers and extravigilant about their rights.

For starters, both the commercial firms like Choicepoint and government authorities routinely generate errors and inaccuracies of all kinds that unfairly penalize union workers. Employers, then, often receive a criminal history report on a worker who, as it later turns out, has simply been confused with someone else with a similar name. Union workers with fairly common names like Smith, Lopez, Williams, or Jones in particular need to be on the lookout for a background check that inaccurately reports a criminal record.

Background Checks: a New Age and a New Rage: In the post-September 11 world, security concerns have become paramount on all forms of transportation services across North America. One result has been a significant increase in employer use of criminal background checks to screen job applicants and even existing workforces.

In fact, a 1997 study found that one in 20 “name-based” background checks – the type done by Choicepoint and most public bodies produces a criminal record for those who in fact have none. Each year, that adds up to an estimated 300,000 innocent workers who have to cope with the results of a “false positive” background check.

Led by a company known as Choicepoint, a growing industry of human resource firms are amassing huge databases and offering criminal history information to private and government employers at relatively inexpensive rates in record time. In 2004, 80% of HR professionals said they conducted criminal background checks, up from 51% in 1996.

The information collected is, moreover, often out of date and therefore largely inaccurate. A study in New York found that 87% of rap sheets had at least one error and that more than 40% contained two errors. And according to some estimates, more than 40% of arrest records have not been updated in at least five years to show, for example, if a case has been dismissed. Needless to say, the implications of an erroneous or inaccurate criminal background report can be devastating.

But there are hardly any legal limits on when employers can run background checks and what information the investigating companies can report to these employers. As a result, even if the policies of a particular employer are tailored to consider only more recent records or just actual convictions (as opposed to arrests), the background report that the employer receives typically shows any contact the individual has had with the criminal justice system – no matter how old, no matter how the case may have turned out, and no matter how relevant any of the information might even be to one’s job.

Protecting Your Interests The lessons to be learned are simple: Get a copy of your criminal record; Know what an employer would likely be told about you. Just like your credit report, it is important to get a hold of your criminal record to be sure it is accurate and complete – and that it does not show activities of someone who has stolen your identity. It is easy enough in most jurisdictions and usually involves just a minor fee, if any.

But Why Should I Be Concerned? The vast majority of us, of course, should have nothing to worry about. (Still, the statistics might surprise you. In the U.S., one in five adults has a misdemeanor or felony record that will show up on a routine criminal background check.)

A non-profit group called the HIRE Network maintains a list of U.S. criminal record depositories at www.hirenetwork.org. Click on the“Resources & Assistance” link on the menu on the top of the page:

But the trend has become so widespread that even union members with no criminal records can end up with serious problems caused by criminal background checks.

Royal Canadian Mounted Police, visit www.rcmpgrc. gc.ca/crimrec/crimrec_e.htm. Correct any mistakes or old information right away; Donâ&#x20AC;&#x2122;t put it off! If you find any mistakes or information that has not been updated (like an arrest without an indication as to the final disposition of the case), contact the agency which maintains the record and follow all available procedures to get your record fixed.

Know Your Rights BACKGROUND CHECKS In the post-September 11 world, security concerns have become paramount on all forms of transportation se...

Know Your Rights BACKGROUND CHECKS In the post-September 11 world, security concerns have become paramount on all forms of transportation se...