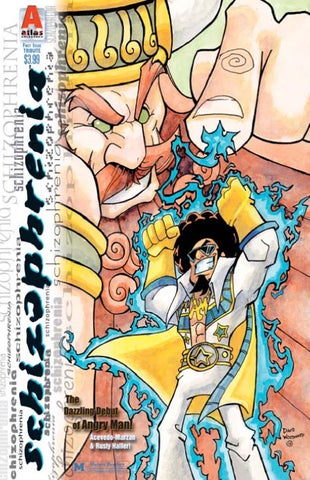 Humble though he was... The creative spark of life to all these worlds... He had seen our future, and kept a museum of our ideas past... We owe him so, so much

mark mazz Editorial & Art Director, Chief Creative Officer Unlock the deadbolt of your mind and release the nightmares within...

to Rusty Haller; December 2010 is published by Atlas Unleashed, LLC. Office of publication: Atlas Unleashed Foundry, 82 Quail Run Drive, Deer Park, NY 11729. Schizophrenia, and its logos and emblems are TM and © 2010 mark mazz. All rights reserved. Front Cover illustration is TM and © 2010 Shawnti Therrien. Back Cover illustration is TM and © 2009 Luka Romel. “Static Lullaby” is TM and © 2010 Nathan Baker and Shawnti Therrien. “Angry Man” is TM and © 2010 Andrew D. Marzan and Rusty Haller. “Compulsion” is TM and © 2010 Rich Terdoslavich. “Doctor Frommenstadt” is TM and © 2010 mark mazz and James Webb. All rights reserved. All characters, stories and art, the distinctive likenesses thereof, and all related indicia are the property of their individual creators. Any similarity to persons living or dead is purely coincidental, the stories, characters and scenarios mentioned in this publication are purely fictional. None of the contents of this publication can be reprinted, reproduced or transmitted, in any form or by any means, without the express written consent of Atlas Unleashed, LLC with an exception of partial content for review purposes only. Dedicated to the endurance, vision and molten creativity of our good friend Rusty Haller without whom this issue would not have been possible.

Remembering So here I am writing to you about Russell “Rusty” Haller nearly a year after he passed. You must be wondering what was so special about Rusty that he’d be remembered so well. So stick with me...I’ll do my best to explain it. Rusty lived and breathed comics. He was a cartoonist who was just as at home drawing a newspaper strip as a comics page. He’d remove the ego of doing a cover, a logo, or character design and actually try to get you what you intended. I’d actually worked with him before we’d physically met, and when I did meet him...He brought a massive sleeve of his work to show me. Rusty was the real deal with page after page of storytelling, hand-painted color work, and several wonderful daily strips which became the back-bone for his own web-comic, Ace and Queenie (www.aceandqueenie.com). Rusty had told me that Sid Jacobson had been his first editor when Sid started the kids’ comic line, STAR Comics for Marvel (after having worked for Harvey Comics for decades). Sid had created Richie Rich, and Casper the Friendly Ghost while at Harvey. Sid was quite frankly a genius and it was obvious that Rusty had been listening. While working for Sid, Rusty’s work graced that puppet TV sensation, ALF. That was to be Rusty’s most high profile work before Ace and Queenie, a decade or so later. What few understand about an artist that can convey humor is that it’s all about the timing. A little bit off and it fails miserably. Rusty...Rusty was a master. You’d find yourself chuckling just reading a bit of dialogue, but his art... He believed every line, every stroke and he made you believe in his world, too. Whether it was Mudd, P.I.(e), Count Duckula, ALF, Bryanna Bunny, The Flintstones, Looney Tunes, Ace and Queenie, or his story here...Angry Man, he could get under the radar and create a complete world. Rusty is one of a handful of creators who believed enough in me to help start Atlas Unleashed. Sure, we had worked together before, but he could have worked with others instead. He chose to have faith in us, and told me how happy he was to work with us. The enthusiasm that he brought to the work, his faithfulness to the story, and steadfast discipline to make his deadlines that made me love working with him. Angry Man is a story that originally was intended to have come out from a different publisher. The choice of the artist at that publisher didn’t work out as we’d planned. From the very beginning we wanted the story to have a sort of under-ground comics feel. Marzan and I had discussed a cross of Gilbert Shelton (Fabulous Furry Freak Brothers), and early CC Beck (the original big red cheese, Captain Marvel). Our original artist hadn’t delivered on either all the artwork, or a consistent approach. Then came a break in the publishing schedule, even more delays, and eventually — I moved on from that publishing partnership. Angry Man was a story I really wanted to see print, and when I started Atlas Unleashed it was at the top of the list. What made the story difficult was finding someone who could hold that dark humor twist—and understood what we were striving for in an art style. I got a phone call telling me that Rusty’s mother had passed and he was devastated. Having lost my mom over a decade before I remembered that loss and gave him a call. We talked for well over two hours. We talked about how she had always told him to pursue his art, and to never let go of his talent. The similarities between us were striking. Overall talking to someone helped him, and at least he was past the stages of denial and anger in his grief. He told me that he had to keep working, and nothing was on his art table. For some reason of synchronicity, I had been talking to Shawnti Therrien about this Angry Man story earlier that day. But I think it was Bob Sodaro who queried, “What about Rusty for...Angry Man?” It was a perfect fit, Rusty could do the timing, and he knew all the styles of the underground artists of the 1960s-‘70s!

Rusty Haller! So when I received the first few pages of character sketches...I was totally blown away. They were fully developed interpretations of Angel, the multi-era street thugs, and a glorious Sumerian god. Marzan and I were stunned. He’d delivered on the promise of the story, and took these skeletal thoughts of an art-style and made them a believable vision. I think I was a bit giddy about it all. I had a surprise happen when Rusty didn’t deliver that next week. He leveled with me that after living his entire life without medical problems, he developed a large sore on his leg. The doctor tested him for diabetes, and sure enough the overwhelming sluggishness he’d been feeling for months was because he had Type 1 diabetes, a life threatening condition that doesn’t go away. The surprise here was that he had told me—and that was a condition my mother had lived with for over 20 years. Unchecked it could lead to mini-strokes, sores that won’t heal, and even amputation of a limb. Frankly, it’s a silent killer of tens of thousands of people a year. A bunch of us formed a sort of support group for Rusty—Eric Lopkin, Bob Sodaro, Briana Benn, Steve Kanaras, Shawnti Therrien, Keith Murphey, Matt C. Ryan, and myself. We tried to help him solve his immediate problems and talked to him about his future. It helped him get approved for state aid for his medical issues, and eventually lead to his relocation. Without the income that his mom had brought into the household, Rusty needed a roommate. Someone whom he could trust and who might look after him if he had a diabetic seizure. Eventually, it was apparent that his landlord wanted him out. Rusty was able to find that perfect roommate, but it was a friend in Columbus, Ohio. He needed some help and we all did our best to help out. The guys over at Free Lunch Comics even held a charity auction of his art to help raise funds for his move and medical needs. He was to start his new life in the same city from which the creators of Superman came. It seemed fitting. 2009 was a financial wasteland for everyone I know. Rusty’s problems seemed to be mirrored throughout the landscape of comic creators. I personally had my share of issues in the month of September. Atlas Unleashed was a month away from its launch, and suddenly my revenue stream dried out. I had zero income to support my wife and our two young children. And it got worse from there. We lost our health insurance. I woke up on my birthday to a cold house and no oil. Everyone I knew was afraid for their jobs, and the placement agencies were all silent. But it got worse— I found out that my youngest daughter (3 years old) had a heart murmur. It felt like an Old Testament test of my faith. The next week, I got a call from Bob Sodaro. He told me that he didn’t want to add to my troubles, but felt I should know. He told me Rusty had passed in his sleep. I was completely silent. Bob immediately apologized for bringing such bad news, and then I thanked him for telling me. I had a moment of clarity, and then told Bob that he had done me a favor. That this wasn’t a burden or a problem. I didn’t have any problems anymore. Rusty had lived through all these issues. Mine were really nothing, and Rusty had shown me that. I was alive, and if Rusty could face his issues, I needed to face mine. He was gone, but he sure was standing over my shoulder that day. So when you ask, “Why remember Rusty Haller?” It’s really quite simple... Rusty was the Best of Us. That’s the way I’ll always remember him. ~mark mazz September 6th, 2010 / on Labor Day for a friend... 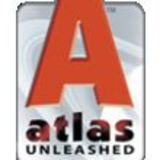 Unlock the deadbolt of your mind and release the nightmares within! Each issue is an exploration of several darkly humorous, weird fantasies...

Unlock the deadbolt of your mind and release the nightmares within! Each issue is an exploration of several darkly humorous, weird fantasies...