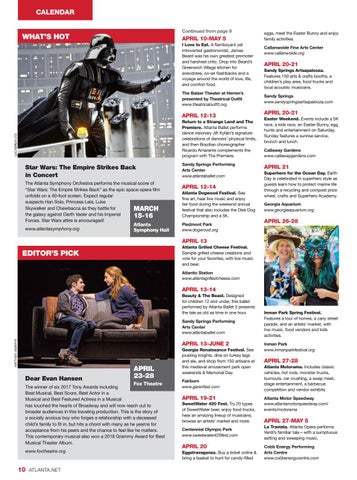 APRIL 10-MAY 5 I Love to Eat. A flamboyant yet introverted gastronomist, James Beard was his own greatest promoter and harshest critic. Drop into Beard’s Greenwich Village kitchen for anecdotes, on-air flashbacks and a voyage around the world of love, life, and comfort food.

The Balzer Theater at Herren’s presented by Theatrical Outfit www.theatricaloutfit.org

Return to a Strange Land and The Premiere. Atlanta Ballet performs dance visionary Jiří Kylián’s signature celebrations of dancers’ physical limits, and then Brazilian choreographer Ricardo Amarante complements the program with The Premiere.

Star Wars: The Empire Strikes Back in Concert The Atlanta Symphony Orchestra performs the musical score of “Star Wars: The Empire Strikes Back” as the epic space opera film unfolds on a 40-foot screen. Expect regular suspects Han Solo, Princess Leia, Luke Skywalker and Chewbacca as they battle for MARCH the galaxy against Darth Vader and his Imperial 15-16 Forces. Star Wars attire is encouraged! www.atlantasymphony.org

APRIL 21 Superhero for the Ocean Day. Earth Day is celebrated in superhero style as guests learn how to protect marine life through a recycling and compost prize wheel, crafts and Superhero Academy. Georgia Aquarium www.georgiaaquarium.org

APRIL 13-14 Beauty &amp; The Beast. Designed for children 12 and under, this ballet performed by Atlanta Ballet 2 presents the tale as old as time in one hour.

The winner of six 2017 Tony Awards including Best Musical, Best Score, Best Actor in a Musical and Best Featured Actress in a Musical has touched the hearts of Broadway and will now reach out to broader audiences in this traveling production. This is the story of a socially anxious boy who forges a relationship with a deceased child’s family to fit in, but hits a chord with many as he yearns for acceptance from his peers and the chance to feel like he matters. This contemporary musical also won a 2018 Grammy Award for Best Musical Theater Album. www.foxtheatre.org 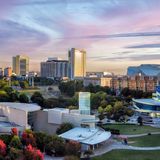