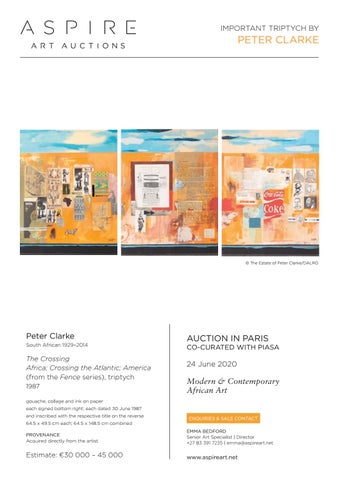 © The Estate of Peter Clarke/DALRO

The Crossing Africa; Crossing the Atlantic; America (from the Fence series), triptych 1987

PROVENANCE Acquired directly from the artist.

The Crossing Africa; Crossing the Atlantic; America (from the Fence series), triptych

Peter Clarke remained for years an artist appreciated by a modest number of cognoscenti until his major retrospective at the Standard Bank Gallery, Johannesburg in 2011 and at Iziko South African National Gallery in Cape Town. Listening to Distant Thunder: The Art of Peter Clarke by respected authors, Phillippa Hobbs and Elizabeth Rankin, which accompanied the exhibition, brought Clarke to a wider audience and witnessed an exponential growth in his market. A comparable work by the artist, Lazy Day, sold at Aspire Art Auctions in 2018 for the record price of R1,479,400. The Crossing is one of Clarkeâ&#x20AC;&#x2122;s Ghetto Fence works in which the artist used gouache, collage and text to express his opposition to the increasing brutality of apartheid. It was made in 1987, a time when any political criticism could put one, let alone someone from a racially marginalised community, as was Clarke, at serious risk in South Africa. This extraordinary triptych celebrates African history and culture, provides a trenchant critique of the exploitation of Africans through the mid-Atlantic slave trade and commemorates icons of black liberation. Each panel offers a particular perspective, but read in sequence from left to right they present a narrative of African and African-American liberation. Subtly encoded within this, is a plea for human rights within South Africa and for the democratic values of dignity, equality and freedom to be extended to all. THE LEFT PANEL In the left panel, entitled Africa, the African continent is central and around it are arrayed iconic works of art significant to African societies from Egyptian tomb murals to an Akua Ba, carried by the Asante women of Ghana. With its full face and high forehead, it is a symbol of Akan beauty. A Benin bronze, like those plundered during the sack of Benin in 1897, is amongst works of art currently in European and American museums, and under consideration for repatriation. Ghanaâ&#x20AC;&#x2122;s magnificent kente and Adinkra cloths, are recognisable around the world as symbols of hope. Under Kwame Nkrumah, Ghana was the first sub-Saharan African country to attain independence in 1957 and became the home of many exiles, such as Stokely Carmichael, the philosopher behind Black Power, whom Miriam Makeba married in 1968.

CONTINUED ON P.4 detail of the left panel: Africa

THE MIDDLE PANEL The middle panel, entitled Crossing the Atlantic, refers to the crossing from Africa to the Americas, in which ships carried Africans to the ‘new world’ where they were sold into slavery. A diagram of a slave ship and documents of the ‘middle passage’ of the triangular trade from Europe, expose the horror of the Atlantic slave trade, a journey of roughly 80 days in which 12.5 million Africans were shipped from Africa with barely 10.7 million disembarking to be sold into slavery in North America, the Caribbean and South America. Clarke’s hand-written text eloquently evokes that horror. THE RIGHT PANEL The right panel, entitled America, profiles some of the most prominent AfricanAmerican leaders who spoke and acted against slavery, racism and inequality, setting the agenda for African-American and Black liberation movements worldwide. In the top register, left to right: Harriet Tubman was born into slavery, but escaped in 1849 to become the most famous ‘conductor’ on the Underground Railroad, risking her life to lead hundreds of slaves from the plantation system to freedom. Fredrick Douglass, born in 1818, escaped from slavery in Maryland, becoming a national leader of the abolitionist movement in Massachusetts and New York. As one of the most famous intellectuals of his time, he advised Abraham Lincoln on the civil war, and became the first black citizen to hold high rank in the U.S. government. In the middle: Marcus Garvey, born in Jamaica in 1887, was a political activist, publisher, journalist, entrepreneur, and orator, the founder of the Universal Negro Improvement Association and African Communities League and a proponent of Black Nationalism and Pan-Africanist movements worldwide. Sojourner Truth, born a slave, took on her chosen name as an advocate for the abolition of slavery as well as for civil and women’s rights, earning an invitation to meet President Abraham Lincoln in 1864. In the lower register: Malcolm X, a leader in the civil rights movement, minister and supporter of black nationalism became a powerful ideological leader against racial oppression and an icon of resistance, more so after his assassination in 1965. Martin Luther King Jr. is the American scholar, minister and activist who became the most visible spokesperson and leader in the Civil Rights Movement from 1955 until his assassination in 1968. The Crossing is a powerful representation of Peter Clarke’s critical thinking in the mid-1980s as increasing political pressure was put on the apartheid government to release Nelson Mandela and begin the transformation of South Africa into a just and inclusive society. Emma Bedford

detail of the middle panel: Crossing the Atlantic

detail of the right panel: America

EXCERPTS FROM PETER CLARKE’S HAND-WRITTEN TEXT INSCRIBED ON THE CROSSING:

History poses the question “who are the civilized, who the uncivilized?” When we were captured and snatched from everything that is familiar to us in Africa, we were too surprised & possessed by fear to give the question any thought. … entire trip was agonizing, a journey in the depths of hell … our past was behind us as if dead, invisible as if it had never existed … Time was measured in terms of rotting … There was no hope … In the new world white people owned us as they would own so much cattle to be bought and sold as & when they wished. We lived or died slaving for them. Dispersed from tribal brothers & sisters, without kinship, language, customs, we lost our inheritance. But through generations of bondage only one thing survived. Soul. The spirit. Among our descendants would be those who would seek freedom, justice, dignity. They would live or die in pursuit of change & respect for their rights. How incredible & pitiful it was that for centuries others not only commanded the course of our lives but also created & distorted the facts of our history. … Eventually we were able to say, “Yes, we were slaves.” Now we shall tell all, “Look at us. This is what we are, Human Beings like yourself. We & you are equals. We are the same, willing wherever necessary to share the fruits of our labour, our knowledge & love with the world at large.

1. Change in total sales, number of lots offered and sold In 2018, Aspire Art Auctions sold Peter Clarke’s Lazy Day (1975), a gouache on paper, for a new, and still standing, world record for just over R1.4 million. Although this was Clarke’s best performing year in terms of the number of works offered and sold at auction, 2017 marks a steep escalation from 2016 with regards to the number of works coming to the market, their sell-through and a sharp rise in prices achieved. It also shows a higher value in turnover of $ 501,796 against a slightly lower $ 489,081 in total achieved from global auction sales in 2018. Clarke’s seemingly fluctuating market from 2011 is indicative of the larger amount of editioned works for sale at lower values. The artist’s singular mixed media, acrylic or gouache works are of greater significance and value, are highly sought after and as a result, continues to demand higher prices at auction.

2011 was a landmark year for Peter Clarke which saw the much anticipated publication of the book on his life and art, Listening to Distant Thunder and the accompanying traveling retrospective exhibitions at the Standard Bank Art Gallery in Johannesburg and the Iziko South African National Gallery in Cape Town. This firmly established Clarke’s position in South African art. The importance of these events manifest in Clarke’s market performance of that year, showing a 100% sell-through of all works that were offered on the market and more than 80% of works were sold above their auction estimate. From 2011 to 2019, there is a consistently low percentage of works that sell below their estimates and the larger part of works sell within their estimates. Although there are works that do not sell, prices and value remain steadfast throughout. Data sourced from MutualArt: www.mutualart.com

This extraordinary triptych celebrates African history and culture, provides a trenchant critique of the exploitation of Africans through th...

This extraordinary triptych celebrates African history and culture, provides a trenchant critique of the exploitation of Africans through th...