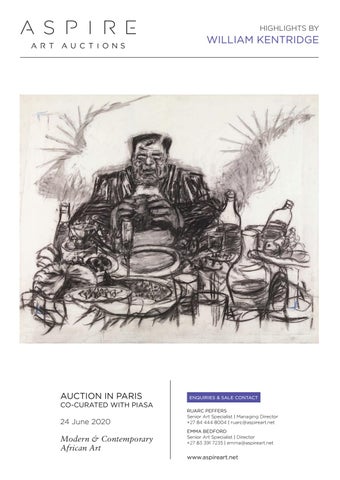 William Kentridge’s distinctive fusion of film, drawing, sculpture, graphics, music, theatre and opera has made him the most widely recognised South African artist in the world today. Johannesburg, 2nd Greatest City after Paris is the first of Kentridge’s ten celebrated Soho Eckstein films which explore the gradual transformation of Soho through his interactions with his alter-ego Felix Teitlebaum and with his ever-changing environment. 1989 was a critical time in South Africa’s history as the world held its breath awaiting the release of Nelson Mandela in February 1990 and the country was poised on the cusp of radical political and social change. Both the film and this seminal drawing offer incisive ways of re-thinking our world, particularly at this time. The sheer iconoclastic power of this Soho image as the ultimate symbol of unconscionable greed is remarkable, providing evidence of the artist’s extraordinary ability to create a significant artistic and political statement from a few strokes of charcoal on paper. The film has its origin in an early dream, as recounted by the artist, of a figure in a pinstriped suit standing outside the EMI headquarters, surrounded by artists and photographers who had come to document Johannesburg, ‘the second greatest city after Paris’ – hardly likely for an apartheid-era city. While the story unfolds on South African soil, it explores universal themes that transcend the local. Some of the artist’s earliest, and politically most influential, artistic precursors are European in origin including William Hogarth, Bertolt Brecht and importantly, French Symbolist writer Alfred Jarry whose absurd portrayal of bourgeoise greed in the figure of Ubu Roi was a major stimulus for Kentridge’s Soho character. More than 20 years after Johannesburg, 2nd Greatest City after Paris (1989) Kentridge’s alter egos indicate that we are all indissolubly linked to others wherever they may be across the globe, as Francesca Pasini so eloquently reminds us.1 Emma Bedford Pasini, F. (2008). ‘The Fragility of Coherence’ in William Kentridge (REPEAT) From the Beginning / Da capo. Milan: Charta Books, p.57.

COURTESY OF THE WILLIAM KENTRIDGE STUDIO

Since studying at the l’École Jacques Lecoq in the early 1980s, William Kentridge has had an abiding interest in Paris, evident in this work with its ornate façade that evokes the Paris Opera designed by Charles Garnier. As the home of the original phantom of the opera and the primary theatre of the Paris Opera until 1989, it is undoubtedly a venue that would have drawn the artist to performances as much as to its Neo-Baroque character. Here the extraordinary opulence of its Napoleon III style provides the backdrop to naked wrestlers observed from an urbane coffee shop counter, an ideal vantage point from which to contemplate a scene of intense passions playing out in the city or perhaps remembered elements of the performative life back in the theatre world of Johannesburg. This drawing is likely to have been produced around 1985/6 at a time of growing political conflict in South Africa to which Kentridge responded with powerful works that marked his emergence as a significant multi-media artist. In 1984 and 1985 he directed Samuel Beckett’s Catastrophe, for the Wits Theatre and the Market Theatre. Commissioned in 1982 by A.I.D.A. (Association Internationale de Défense des Artistes), Beckett had dedicated it to then imprisoned Czech reformer and playwright, Václav Havel. Kentridge’s charcoal drawing, Watteau’s Tea Room of 1984-5 and the animated film, Vetkoek/ Fête Galante made in 1985, reference Antoine Watteau’s eighteenth-century Fêtes Galantes depicting aristocratic scenes of mirth and merriment in a mythical Arcadian world, as a means to critique the increasing racial and social disparities in his home country. In this regard they are comparable to the present lot as well as to two major triptychs of the period: - Dreams of Europe produced between 1984 and ‘85 - The Conservationists Ball: Culling, Game-watching, Taming (1985), in the Rembrandt van Rijn Collection at the Rupert Museum in Stellenbosch. Emma Bedford

SCULPTURE FOR RETURN (DOUBLE HALF HORSE)

William Kentridge’s Sculpture for Return (Double Half Horse) was produced for his solo exhibition at the Fondazione Bevilacqua La Masa in Venice in 2008 accompanying the film commissioned for projection onto the safety curtain of the stage of La Fenice, Venice’s historic opera house. It was an occasion to celebrate multiple returns: Montiverdi’s The Return of Ulysses – first staged in Venice in 1640 – was produced by Kentridge in conjunction with The Handspring Puppet Company, presented in Brussels in 1998 and again in 2004 before returning to Venice in 2008. And the artist himself was returning to Venice. Like opera – in Italian, the plural for works – this sculpture needs to be experienced in all its multiplicity, in the round. As an orchestra tunes up, with individual instruments and disparate sounds eventually cohering into a whole, so the sculpture’s varying forms can be appreciated from different viewpoints by turning the work or circumnavigating it. The horse is not static. Light and shadow animate the work, creating dynamism as its own shadow casts other characters until it returns to itself. The confusion of the moment gives way to clarity and revolves in a continuous back-and-forth between perceptions and understandings, making us question fixed ideas and static notions. The Sculptures for Return are designed to be filmed. As figures that embody the multiplicity of existence and invite circular rather than two-dimensional perception, they challenge the authority of a singular viewpoint or the unitary conception of a person or indeed, any living being such as a horse. The artist explains “there is a central logic behind the whole project, it is the argument of the fragility of coherence, in which the coherence and disintegration of images refers also to other fragilities and breaks”.1 Emma Bedford Kentridge, W. (2008). ‘Some Notes on (Repeat) From the Beginning / Da capo’ in William Kentridge: (REPEAT) From the Beginning / Da capo. Milan: Charta Books, p.25.

CHANGE IN TOTAL SALES, NUMBER OF LOTS OFFERED AND SOLD Tracks the change in total value of sales as well as the total number of lots offered and sold annually. The chart shows whether the artist’s total sales are going up, and if so, whether this is because more works by the artist have been offered and sold or, because more high value artworks have been purchased. $6M

1. Change in total sales, number of lots offered and sold William Kentridge is ranked among the top-selling 100 artists at auction by turnover. In 2019, sales of his work totaled just over $4.4 million. 2017 was the artist’s best preforming year with a total turnover in sales at $5.5 million. This was the same year Aspire Art Auctions successfully sold Kentridge’s Drawing from Mine (Soho with Coffee Plunger and Cup) for just over R5.4 million, a record price for a drawing by Kentridge in South Africa at the time and beating its high estimate of R2 500 000 by more than double. From 2017 to 2019, more works have been offered and sold at auction and at higher prices – especially for important drawings and sculptures. In 2018, Aspire, surpassed its own record by setting a new world record price at auction for a Kentridge drawing by selling Drawing from Stereoscope (Double page, Soho in two rooms) for an outstanding R6.6 million. 2019 saw a total of x123 works sold at auction internationally, this is the highest number of works by the artist ever to be sold at auction alone. This sharp rise in demand for Kentridge’s work is reflective his current artistic legacy.

2. Sold lot performance against estimate Since 2011, the sell-through rate for Kentridge’s work at auction remain at a steady 70%-80%, except for 2015, which saw a slight drop. 30%-45% of works offered at auction sell within their auction estimates with 20%-40% of works that sell well above. Only 2%-7% of the works on offer do not sell. Kentridge’s performance in 2017, 2018 and 2019 has been the best overall in the last decade. 2017 saw the highest proportion of works sell at prices above the auction estimate, a figure which stayed buoyant the following 2 years. This upward trajectory in the amount of work on offer year on year indicates an increase in demand and market value. Data sourced from MutualArt: www.mutualart.com

William Kentridge’s distinctive fusion of film, drawing, sculpture, graphics, music, theatre and opera has made him the most widely recognis...

William Kentridge’s distinctive fusion of film, drawing, sculpture, graphics, music, theatre and opera has made him the most widely recognis...