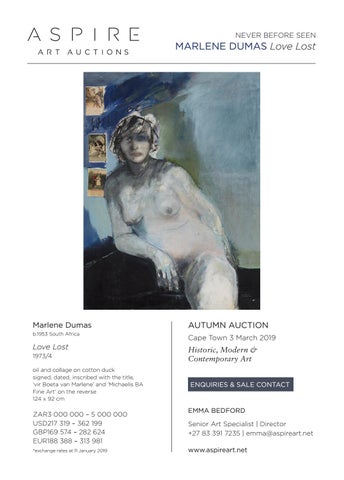 MARLENE DUMAS Love Lost Aspire Art Auctions is honoured to offer Marlene Dumas’ Love Lost on our 3 March 2019 auction at the Avenue in the V&A Waterfront in Cape Town. Never before has a unique work by this South African–born, Amsterdam–based artist been offered for sale at auction in South Africa. While Aspire Art Auctions has broken several records for established artists such as William Kentridge, Alexis Preller, Sydney Kumalo and Peter Clarke, and achieved records for younger artists of the calibre of Athi–Patra Ruga, Georgina Gratrix, Zander Blom and Pieter Hugo, this unique Dumas is sure to set a new benchmark. Love Lost is a remarkable early work that draws on many of the themes for which Dumas has become such a sought–after artist. In her exploration of women, Dumas has framed her subject in innovative ways, paying attention to real women rather than reproducing idealised images of women – making her one of the most influential artists of her generation.

LOVE LOST Marlene Dumas grew up on the Jacobsdal wine farm in the Kuilsriver area and was schooled at Bloemhof in Stellenbosch before going on to major in painting at the University of Cape Town’s Michaelis School of Fine Art. In Love Lost, Dumas has created a sensitive portrait in which a naked woman sits comfortably, engaging the viewer with a direct gaze. This is no reclining nude freighted with the baggage of art history, but a frank painting of a flesh-andblood woman who is as conscious of her sexuality as she is aware of her own intelligence. She is surrounded by collaged Victorian postcards extolling romantic love and pining for its absence. With an extraordinary economy of paint, she captures psychological depth and mood. “… it requires a great deal of intelligence to observe the intelligence of the body”i is one of her favourite quotes. While respecting one another, the painterly expressiveness of Dumas’ style is uniquely different to that of Stanley Pinker, her painting lecturer at the Michaelis School of Fine Art, where she was a student at the time she produced this work. The almost smudged areas around the eyes, suggesting mystery, presage the washed–out figures, so characteristic of her mature oeuvre. Dumas’ heightened sense of surface parallels her sensitivity to skin, that permeable layer between self and other, and register of difference, desire and delight. J. Krishnamurti, inscribed in Dumas’ notebook, 1974-76. Quoted in Dumas, M. and Bedford, E. (2007). Marlene Dumas: Intimate Relations, unpaginated introduction. i

MAJOR WORK BY DUMAS IN LOCAL COLLECTIONS The Next Generation is a suite of watercolour portraits exhibited at the first Johannesburg Biennale and gifted by the artist to Iziko South African National Gallery. Produced in 1995, in the wake of SA’s first democratic elections, it is “fraught with meaning” – to use the artist’s term – conjuring as it does, a range of living and loving, feeling and thinking South Africans. It begs the question “who are the next generation?” Dumas’ desire for a different world is aptly articulated in her poem of the same title: When Black and White are colours and not races, people will still fall in love and discriminate between partners and feel sad and bad and need art that breaks your heart and takes you to those places where pain becomes beauty.ii The Benefit of the Doubt is a suite of tapestries designed by Dumas in 1998 for Charles Vandenhove’s Palace of Justice in the Dutch town of Den Bosch. In 2004 an identical set was donated to the Constitutional Court in Johannesburg. As part of a public collection these are unlikely ever to come onto the market. Few, if any, major works by Dumas are included in any local public collections. The last occasion on which South Africans had an opportunity to see a collection of her work was during the run of the exhibition, Marlene Dumas: Intimate Relations curated by Emma Bedford in close co-operation with the artist, and on view at Iziko South African National Gallery, Cape Town from 7 November 2007 until 13 January 2008 and at The Standard Bank Gallery, Johannesburg from 5 February until 29 March 2008. Significant works from public and private collections in The Netherlands and Belgium provided insights into her practice for throngs of delighted visitors. Dumas selected fellow artist and photographer, David Goldblatt, to present the opening address at the first venue. The human figure has been the focus of Dumas’ art throughout a stellar career in which she has explored themes of the cycle of life, gender, sexuality, pleasure and pain. How we experience the world in and through the body are central concerns. Her works are often fearless critiques of political and social attitudes towards people of colour, women, children, and other historically victimised groups. Penetrating portraits depict people, ranging from her family and friends such as fellow South African artist Moshekwa Langa, to famous faces including those of Naomi Campbell and Nelson Mandela. ii

Marlene Dumas, The Next Generation (detail)

MARLENE DUMAS IN THE MARKET Dumas is widely regarded as one of the world’s most prominent and talented painters. Her reputation in the South African and International markets is impeccable, and despite making the Netherlands her home for many years, she is still considered by many as South Africa’s foremost living artist. Her output is not prolific, but despite the relative scarcity of supply she has a global reputation in the auction market. In February 2005, at Christie’s in London, her work The Teacher (sub a) (1987) – a large, horizontal group portrait that typically reflects both childhood sentimentality and a reflection on authority – sold for GBP1 800 000. This made Dumas, at the time, “the world’s most expensive living female artist”. Dumas bettered her own auction record with the sale of The Visitor (1995), auctioned for GBP3 177 250 at Sotheby’s London in 2008.

Dumas has a steadily growing reputation and performance in the auction market. The following graphs demonstrate exactly how her work has performed at auction over the last decade.

CHANGE IN TOTAL SALES, NUMBER OF LOTS OFFERED AND SOLD Tracks the change in total value of sales as well as the total number of lots offered and sold annually. The chart shows whether the artist’s total sales are going up, and if so, whether this is because more works by the artist have been offered and sold or, because more high value artworks have been purchased. $20M $15M $10M $5M $0 2008 Lots Sold

1. Change in total sales, number of lots offered and sold The cementing of Dumas’ reputation at auction is evident when we compare the steep escalation of the number of lots offered and sold in 2016 and 2017, compared to the realised prices. In 2017 in particular, very few lots went unsold, in a year in which more lots by Dumas were sold overall, and more lots were sold at higher values. This indicates both a stronger supply to the auction market by collectors during the year, and a consistently high regard for her work.

CHANGE IN MEDIAN ARTWORK PRICES OVER ESTIMATES Tracks annual change in an artist’s median prices and estimates. The chart shows whether an artist’s prices are rising or falling. Using the median auction price offers a more representative view of the artist’s auction market over time. $125K $100K $75K $50K $25K $0 2008

2. Change in median artwork prices and estimates The median value chart has the advantage of showing whether an artist’s prices are rising or falling, without the distortion caused by the sale of exceptionally high value lots. In Dumas’ case, after a median peak in the early years of the decade, and a fall off in median prices thereafter which may reflect relatively low supply, there has been an escalation in all three median parameters in the last two years: low and high estimates and prices realised.

SOLD LOT PERFORMANCE AGAINST ESTIMATE Tracks the performance of lots against their estimate, indicating how many sold within, above or below this range, or remained unsold. This chart shows how the artist’s market performed compared to pre-sale expectations.

3. Sold lot performance against estimate This key auction metric demonstrates several market realities. Often the performance of single works selling for seven-figure prices obscures a rather different reality for the bulk of an artist’s work at auction. Dumas’ performance in 2016 and 2017 has been the best overall in the last decade. 2016 saw the highest proportion of her work sell at prices above the auction estimate, a figure which stayed buoyant the following year. In addition, 2017 saw the lowest proportion of her work in the last ten years which went unsold. Seen along with the higher amount of work overall on offer in the year, this amounts to an increase in demand and value – essentially, a bull market for the artist. CONTINUED ON PAGE 6

4. Top lot performance vs Top 5 related artists A significant art world metric reveals that Dumas performs better at the high-end of the auction market than many of her contemporaries and related artists. Indeed, her top lot performance on average outstrips influential contemporaries such as Luc Tuymans and Cecily Brown by some margin, indicating a consistently high opinion of her work and financial commitment to it. Data sourced from MutualArt: www.mutualart.com

Marlene Dumas: Oscar Wilde and Bosie, National Portrait Gallery, London [part of I Am Me]

TOP 6 WORKS SOLD AT AUCTION Dumas’ skilful and compelling figurative paintings have captivated collectors across the globe. Her current auction record is GBP3.1 million (USD6.3 million) – around ZAR86 million – set at Sotheby’s London in July 2008, for The Visitor painted in 1995. The Teacher, produced in 1987, held the record at the time for the highest price fetched by a living female artist, having sold for GBP1.8 million (USD3.3 million) at Christie’s London in 2005.i iii