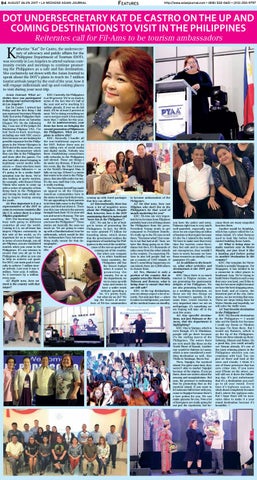 atherine “Kat” De Castro, the undersecretary of advocacy and public affairs for the Philippine Department of Tourism (DOT), was recently in Los Angeles to attend various community events and meetings to continue promoting the Philippines as a safe and fun destination. She exclusively sat down with the Asian Journal to speak about the DOT’s plans to reach its 7 million tourist arrivals target by the end of the year, how it will engage millennials and up and coming places to visit during your next trip. Asian Journal: What activities have you participated in during your current trip here in Los Angeles? Kat De Castro: I arrived last Friday and the first thing I did was represent Secretary [Wanda Tulfo Teo] at the Philippine Madrigal Singers show on Saturday [August 19]. On the following day, I was one of the judges for Binibining Pilipinas USA. I’ve had back-to-back meetings, including one with NBC executives because we are looking for possible exposure for the Philippines in the Winter Olympics in 2018 and at the same time, come up with a documentary which they can film in the Philippines and show after the games. I’ve also had talks about bringing in legitimate social media influencers — those who have more than a million followers — so it’s going to be a media familiarization tour for them. We’re also looking at sports tourism, for example, with [boxer] Brian Viloria who wants to come up with a series of episodes of him flying back to the Philippines and tracing his roots while trying to inspire boxing among the youth. AJ: How important is it as a representative of the DOT to come to overseas countries like the U.S. where there is a large Filipino population? KDC: The Secretary has been busy with going to different countries all over the world. Coming to LA, we all know has largest Filipino community in this side of the world, so it’s important for us to touch base in terms of even though, you all are Filipinos, you are considered tourists when you come to the Philippines. It’s our mission to ensure that you all go to the Philippines as often as you can to help us achieve our goals. For 2017, our main goal is basically to achieve 7 million tourist arrivals. Last year it was 6 million. Next year, 8 million. So it increases by a million every year. AJ: Right now, how on track is the country with that target?

KDC: Currently, the Philippines is at 30 percent. We’re on track in terms of the fact that it’s half of the year and we’re reaching 3.5 million already. If ever we do fall short, it’ll be at least 2 percent at most. We’re doing everything we can to not just reach it but maybe more than 7 million for this year. AJ: As undersecretary, your focus has been on bringing the second generation of Filipinos to the Philippines. What are your plans to achieve this? KDC: Basically I handle all the non-traditional aspects of the DOT. Before there was no one taking care of social media and digital media. Nobody was there establishing connections with networks in the Philippines and abroad. Those are things I do under my division. If there’s a live event, like the Miss Universe or the World’s Strongest Man, it falls on my lap. If there’s a movie that wants to be shot in the Philippines, that also falls under me too. It’s the new stuff that I do, which is really exciting. The Secretary herself has made an appeal to all the FilipinoAmerican communities here in the states to trace back their roots. We are appealing to their parents to let their kids come to the Philippines and find out about it. There was this case wherein the parents brought back their 13,14-year-old son and went to Boracay. The son said something like, “Why did you leave the Philippines?” These stories are basically the ones we touch on. We are going to come up with a [familiarization] tour for millennials, which would be like the Ambassadors Tour, but something really meant for that demographic. We are also

coming up with travel packages that they can afford. AJ: Internationally, there has been a lot of negative news about the Philippines. Despite that, however, how is the DOT maintaining that it is indeed still ‘more fun in the Philippines’? KDC: We ask for a lot of budget in terms of promoting the Philippines. In fact, for 2018, we were granted P1 billion for branding alone, which shows that the government realizes the importance of marketing the Philippines to the rest of the world because of the not-so-good stuff coming out of the country. But when you compare it to other Southeast Asian countries, the Philippines still has the lowest budget when it comes to promoting the country. For us at the department, we try to come up with ways and means to have a wider reach without spending a lot. It’s pretty hard, but what do we do? We tap the hearts of members of Fil-Am communities

to become ambassadors of the Philippines. AJ: On that note, how can Filipinos who don’t live in the Philippines be that word of mouth marketing for you? KDC: Fil-Ams are very important for us because [non-Filipinos] probably hear a lot of things about the Philippines from the press. President Trump tends to get compared to President Duterte. It’s really up to the Fil-Ams to tell them, ‘You know what? Our country is not that bad at all.’ Sure, we have this thing going on in Mindanao but then, it’s thousands of miles away from the other islands in the country. I’m expecting FilAms to also tell people that we are a country of 7,107 islands. If there’s something happening on one island, there are 6,000 others to choose from. AJ: Yes, Marawi is only a portion of the country. But in popular areas like Metro Manila, Palawan and Boracay, what is being done to ensure that they are still safe? KDC: At the top destinations, you can always expect a lot of security. Not only just that — when it comes to emergencies, you have all the medical teams on standby,

you have the police and army. Palawan right now is very much well-guarded, especially now since we are expecting an influx of tourists to that region because it’s the No.1 island in the world. We have to make sure that every time the tourists come there, they feel safe and in case there are emergencies, they wouldn’t have to worry because we have those resources on standby. I can guarantee it’s safe. AJ: In addition to the beaches, what other activities and destinations is the DOT promoting? KDC: Since there is so much interest in Filipino cuisine, we are promoting the gastronomic delights of the Philippines. We are also promoting the country as a wedding destination, so those are the two things on the Secretary’s agenda. At the same time, cruise tourism is very important since we are an archipelago, it’s something we are hoping will take off in the next few years. AJ: Any specific destinations, not just Palawan or Boracay, that the department is highlighting? KDC: One is Siargao, which is even though, it’s in Mindanao, people still go there because it’s the surfing mecca of the Philippines. The waves there are very much like those on the North Shore of Hawaii. Another one would be Balesin in Luzon, which is now considered a wedding destination as well. Also Vitalis in Santiago, Ilocos Sur. Then, Siquijor, the mystical island. For quite some time, they weren’t able to market Siquijor because of the stigma. If you go there, there are stories about the aswang and mangkukulam. But now, the province is embracing that by promoting that as the mystical island. If you want to let someone fall in love with you, come to Siquijor because there’s a love potion for you. We can make gayuma for you. Now a lot of foreigners are really going for not just the mysticism, but be-

cause there are many unspoiled beaches there. Another would be Romblon, which has a place called the Carabao Island. It’s what Boracay used to look like before they started building those hotels. AJ: What is being done to make tourists stay in Metro Manila, not just treat it like a landing pad before going to another destination in the country? KDC: Our template for Metro Manila is actually Singapore. For Singapore, it has tended to be a connector to other places in Southeast Asia. We’re trying to build Metro Manila in such a way that once you land, you’d like to stay for two more nights because we have the best shopping areas, best food, and of course, the historical part of the city, Intramuros, we are reviving that now. These are steps being done for Metro Manila and hopefully, we will solve the traffic soon. AJ: Your favorite destination in the Philippines? KDC: My favorite destination in the Philippines — I would take out the family ties because I could say Davao or Mindoro because I’m from there. But I would say Batanes, which is on the tip of the Philippines. There are three islands up there: Sabtang, Itbayat and Batan. On a good day, you could actually see Taiwan already. It’s one of the most relaxing places in the Philippines wherein you can commune with God. You can just sit there and look at the stars and clouds. I think it’s one of those provinces that has zero crime rate. If you leave your iPhone on the street, you will still see it there the following day. It’s just unfortunate that it’s a destination you can’t go to all year round. Every time it’s typhoon season, it shuts down completely because that’s where the typhoon exits. But I hope there will be measures done to make it a year round destination because it’s beautiful. n 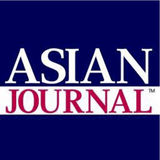